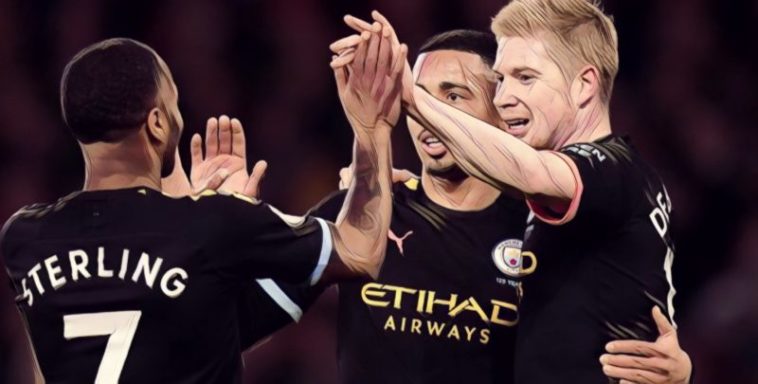 Man City bounced back from their Manchester Derby defeat and heaped more misery on Arsenal, Pep Guardiola’s side running out convincing 3-0 winners at the Emirates this evening.

It took just two minutes for the reigning Premier League champions to exert their authority, Kevin De Bruyne lashing home into the roof of the net.

Belgian midfielder De Bruyne was at his mercurial best at the Emirates today, laying on a fine assist for Raheem Sterling, before firing home an excellent left-footed effort to kill the game as a contest with just 40 minutes on the clock.

Man City seemed to almost take pity on an abject Arsenal side during the second period, with Guardiola’s side content to play keep ball as the Gunners chased shadows.

This is Kevin De Bruyne’s world and we’re just living it.

Speaking afterwards man of the match De Bruyne revealed he was happy with his side’s reaction to their derby day defeat, and when asked by Sky Sports if he was disappointed not to score a hat-trick the 28-year-old replied:

“It would have been nice but to score two goals and come away with a good win with the struggles we had a little bit is nice.

“I think every time you lose a game the only reaction you can show is to win the next one. Every time we lose points we come back with a good reaction.

”We know we have not been at our best this year but we keep on fighting and there’s still a lot of games to play for us.”

Next up for City is an away trip to Oxford United in the Carabao Cup quarter-final, before they welcome second placed Leicester to the Etihad next weekend.