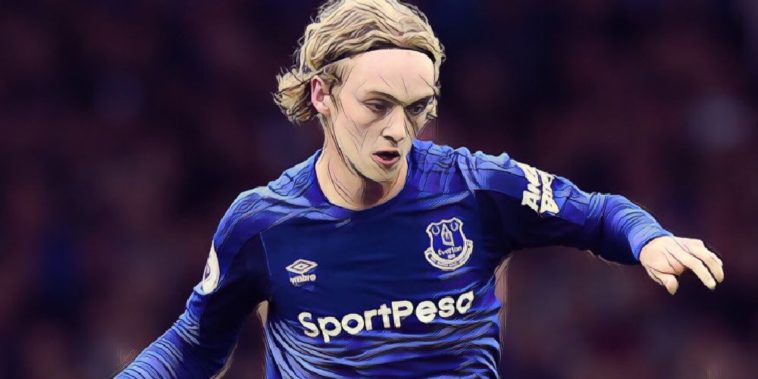 Everton midfielder Tom Davies has revealed that he is looking to learn from his experienced teammates, Gylfi Sigurdsson and Andre Gomes, players he describes as technically ‘excellent’.

Both Gomes and Sigurdsson have been two of Everton‘s better performers this season in what has been a less than impressive campaign, with the Toffees currently sitting in ninth.

Sigurdsson has already more than doubled his output for Everton this season, scoring nine goals this time out compared to the four he scored in his debut campaign at Goodison Park, while Gomes has shown himself to be a classy operator in the centre of the park for the Blues since arriving on loan from Barcelona in the summer.

Speaking about his midfielder partners, Tom Davies has admitted that he is looking to learn from their experience to develop his own game.

“They are both very good on the ball and excellent technically and I am looking to learn from them to improve my own game,” Davies told Everton’s official website.

“Gylfi has been performing in the Premier League a long time and Andre has been to Barcelona and played a lot in La Liga.

“There is plenty to take from them so I will be trying to pick up any tips I can from both.”

Davies has only started 10 league games all season for The Toffees, being an unused substitute on 14 occasions. However, he has started all of Everton’s last four Premier League games, captaining the side on his last two outings, and the 20-year-old thinks that he is improving as a player.

“I didn’t play for a while but felt I was doing well in training and was waiting for my chance. There is a lot of competition for places, so you have to keep your standards very high.

“I think the period of training and learning from the manager was valuable. I always train as hard as I can, so when the games come, I am ready.

“I think that showed when I got my chance.

“I will do my best to stay in the team and hopefully I can manage to achieve that.”