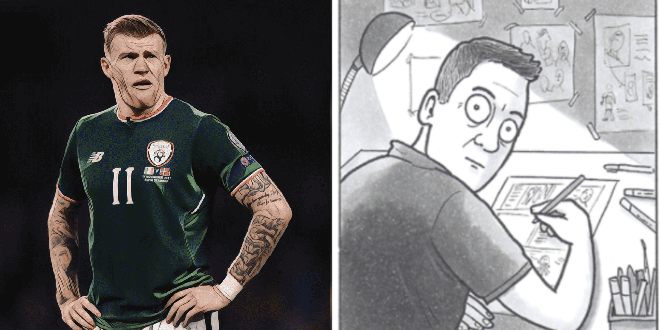 Not long into our conversation, David Squires has the perfect example to illustrate just how far the insanity of poppy season has gone in everyday life:

Someone stopped my friend in the street the other day and asked why her dog wasn’t wearing a poppy. It’s just mad.

This one line anecdote perfectly encapsulates the strain of poppy fascism that has infected British society, it has now become compulsory to wear in November rather than a voluntary choice to commemorate those that served in the armed forces.

The Guardian’s resident football cartoonist is here to talk about his new book, Goalless Draws, but it’s not long before the poppy comes up in conversation, given the time of year. He has drawn a comic about Poppygate the week of Remembrance Day every year since he’s started working at the newspaper. He says people have already been tweeting him for weeks, asking when is his poppy cartoon is coming.

Football’s relationship with the poppy has become increasingly closer and simultaneously more complicated in the past decade. Around 15 years ago, no one batted an eyelid when footballers took to the pitch with no poppy stickered to their chest. Nowadays the FA are willing to bring FIFA to the international Court of Arbitration for Sport when the national teams of England, Scotland and Wales were fined for wearing poppies, which violated FIFA rules for displaying political symbols.

The first cartoon I did for the Guardian was on the subject of Poppygate and it was when James McClean was first starting to get real abuse for not wearing one, so I did a cartoon on that.

Ah, James McClean. The lightening rod for so much of the bluster and vitriol this time of year. The Republic of Ireland international caused much controversy in England for his refusal to wear one while playing for Sunderland, continuing to do so while playing for Wigan Athletic, West Brom and Stoke City in the six years since.

As an Irish Catholic born and raised in Derry, McClean’s stance should be entirely understandable. As explained in an open letter to Dave Whelan, at the time Wigan chairman, the winger could not wear a poppy because it was “used to remember victims of other conflicts since 1945.” Hailing from the Creggan estate, from which six residents were Civil Rights marchers killed by the British Army on Bloody Sunday in 1972, McClean would therefore consider it disrespectful of him to wear a poppy.

Although Squires’ job is to funnel humour into the world of football, he finds the whole thing depressing:

Yeah I despair really, it’s pretty depressing. I saw the videos from last weekend when there’s a group of fans abusing him as he goes off the field. I think it reflects the political climate in Britain and I think that’s obviously got worse in the last few years, since I started drawing those cartoons in 2014.

Brexit looms large and has seen an increase in hate crimes since the referendum, but there is also a growing toxicity in the stands at England games, where match goers have been heard singing “No Surrender” and “Fuck The IRA”. Living far away from it all in Sydney, Australia, Squires says he can’t speak on the subject with any “great authority”, but he suspects that there is an element of anti-Irishness to it all.

Some of the chants that sections of the England support sing have been well documented. It’s being sung by people who are younger. There was the game in Spain the other week, and you’ve got groups of lads in their twenties singing about the IRA, the Pope and all the rest of it, it’s bizarre. Like I said, pretty depressing.

There probably is an anti-Irish agenda to it as well, so I’ll be really interested to see what happens with Nemanja Matic.

The Manchester United midfielder explained earlier this week why he didn’t wear a poppy against Bournemouth despite wearing one in previous years, and that he won’t be wearing them in future. It is yet to be seen whether or not the Serbian international will be on the receiving end of similar abuse.

With Poppy Mania becoming “madder and madder” with each passing year, Squires says it is becoming more difficult to poke fun at it as time goes on:

It’s becoming increasingly difficult to exaggerate the kind of things that people are doing in real life. So it’s like with cartoonists and satirists who find it hard to land a glove on Donald Trump, because of the way he behaves is more cartoon-ish than anyone can imagine for the purposes of comedic exaggeration. I’m finding that a bit with the poppy stuff.

In some ways, life really is imitating art. A few years ago David drew a man covered from head to toe in poppies.

If satire is truly dying in this context, we may not see any more of his Poppygate creations:

I do have a few jokes that I’ve written down for next week, but if something more interesting happens in the seven days, then maybe I’ll just settle for that one poppy joke in this week’s cartoon and we can all move on.

Here’s hoping we can.

You can listen to the interview in full here thanks to the ever excellent Nostalgia Ultras: