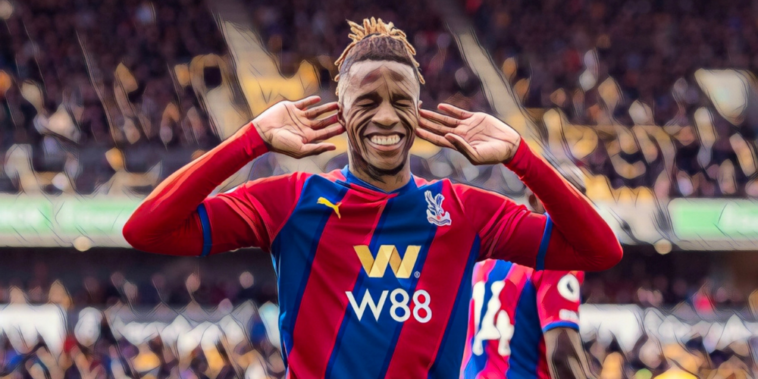 Crystal Palace will consider offers for Wilfried Zaha this summer as the forward enters the final season of his contract at Selhurst Park.

Zaha has been a talismanic presence for the Eagles in recent seasons and the club have continually turned down approaches for the 29-year-old, with his value to the side outweighing the proposals submitted from rival sides.

Palace, however, have shown encouraging signs under Patrick Vieira and the emergence of Michael Olise and Eberechi Eze has lessened the side’s reliance on Zaha.

Zaha remains the club’s most influential player and is the Eagles’ leading scorer this season with 10 Premier League goals, though the Mail are reporting that Palace will consider offers this summer should the Ivory Coast international not sign a new deal.

Palace have built a promising core of talent in recent windows with the likes of Olise and Eze joining newly-capped England internationals Marc Guehi and Tyrick Mitchell in providing the foundation for a side that can begin to look upwards.

Vieira’s side beat Arsenal 3-0 on Monday to move ninth in the Premier League and their improvement could yet see Zaha choose to remain at Selhurst Park.

Palace will also take on Chelsea in the FA Cup semi-finals later this month, after Zaha scored in the 4-0 thrashing of Everton in the quarter-finals.

Palace will be reluctant to lose Zaha – who has previously attracted interest from Arsenal and Everton – for free in 2023 and their stance on his sale has softened amid his failure to sign a new deal.

His age and contract situation mean the fee Palace can demand will be significantly less than the £80m the Eagles once valued the Ivorian at and could lead to new approaches – and a potential exit – in the summer window.