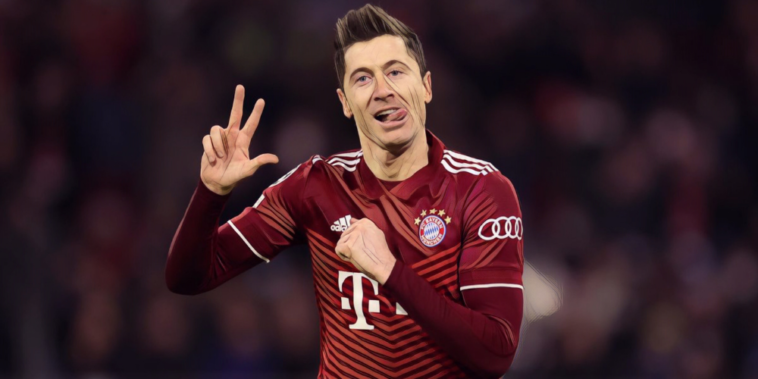 The UEFA Champions League has reached its latter stages as the remaining eight teams compete to be crowned champions of Europe in 2022.

The Premier League teams face strong competition from Spain and Germany, however, whilst Benfica will hope to upset the odds as the remaining side from outside Europe’s top five leagues.

The best players rise to the occasion on the biggest stages and ahead of the quarter-final ties we’ve picked out the key names from the remaining eight teams.

Virgil van Dijk’s return this season has contributed to Liverpool challenging on four fronts, the defender’s absence for much of last season hindering hopes of silverware success.

Liverpool take on Benfica in the quarter-finals and Van Dijk will form part of a defence that has conceded just three goals across their last 13 matches, defensive form which could form the bedrock of a Champions League challenge.

Van Dijk offers a commanding and reassuring presence in the Reds backline and his performances will be crucial to their hopes of reaching the latter stages.

Outstanding in the away win at Inter Milan in the last-16, he will hope for another strong showing as Liverpool travel to Portugal on Tuesday evening.

There will be plenty of interested eyes running the rule over Darwin Nunez this week, the Benfica forward whose list of admirers appears to be growing with each performance.

Scorer of the decisive goal in the last-16 win over Ajax, he has 27 goals in 34 appearances for the Portuguese side this season including four in the club’s Champions League campaign.

Benfica are through to the quarter-finals for the first time since 2015/16 ✅@slbenfica_en | #UCL pic.twitter.com/A2VOHWcite

Manchester United and Arsenal are understood to be among those considering a summer approach for the 22-year-old, whose athleticism and improving instincts around goal make him an ideal candidate for sides seeking a mobile option at centre-forward.

Benfica’s best hope of an upset against Liverpool in the quarter-finals will be finding a supply line to a forward oozing with confidence.

Pep Guardiola’s demands for midfield dominance are well documented and in Kevin De Bruyne he has the perfect player to execute those wishes, the Belgian arguably the most complete midfielder in world football right now.

Fitness problems have disrupted De Bruyne’s rhythm across the past two seasons, but a run of five goals and two assists from his last eight Premier League games is an encouraging sign that the 30-year-old is reaching his best form at a crucial time.

.@DeBruyneKev getting us off to a great start! 💪#ManCity pic.twitter.com/DSKkBtoEQd

City will face an Atletico Madrid team hell-bent on frustrating them across two legs in the quarter-finals and De Bruyne’s delivery and ability to unlock defences could prove the difference.

De Bruyne was substituted out of last season’s final with a concussion and he will be determined to make amends this time around as City look to end their European wait in 2022.

Atletico Madrid’s approach will have few surprises in the Champions League’s latter stages, as the Spanish side look to frustrate opponents and progress.

Diego Simeone’s side are famously pragmatic and in Jan Oblak boast one of the best goalkeepers in European football.

Oblak’s standards have dropped somewhat this season following a period of excellence in Madrid, but he was in inspired form during the last-16 win at Manchester United.

Oblak will need to be at his reactive and agile best ahead of a two-legged encounter with Manchester City, the side deemed as the bookmakers’ favourites to win the Champions League this season.

N’Golo Kante has had a stop-start season for Chelsea this term, but the midfielder often saves his best for Europe.

Kante was exceptional during Chelsea’s run to Champions League success last season, being named man of the match in both legs of the semi-final and in the final win over Manchester City.

The France international was again declared the best on the field as Chelsea beat Lille at home in the last-16, a remarkable run of performances from the midfielder on Europe’s biggest stage.

Kante’s all-action running helped Chelsea outrun an ageing Real Madrid midfield in last season’s semi-finals and his industry will again be crucial as the two teams resume rivalries in the 2021/22 quarter-finals.

Real Madrid would be watching the quarter-finals from the comfort of their own homes were it not for the brilliance of Benzema, with the forward’s sensational hat-trick sealing a comeback win over Paris Saint-Germain last time out.

Two goals down with less than half an hour of the tie remaining, Benzema scored three times in just 17 minutes to book the record 13-time winners their place in the quarter-finals.

This is now the best goalscoring season of Karim Benzema's career ⭐️ pic.twitter.com/5EL8NeAwHG

The 34-year-old is enjoying the best season of his career and leads La Liga for goals and assists, whilst a brace in the win over Celta Vigo last weekend saw the Frenchman become Real Madrid’s third-highest league goalscorer.

Benzema has provided 47 goal involvements in just 35 appearances across all competitions this season and will be hoping to fire the Spanish side to a record-extending 14th Champions League crown.

Villarreal will be delighted to have Gerard Moreno in their ranks against Bayern Munich, with the forward having endured a frustrating season with injuries.

Moreno scored 30 goals in all competitions last season for the Europa League winners and has netted eight from just 13 league starts for Unai Emery’s side this season.

The 29-year-old scored in the last-16 win over Juventus and will now hope to make his mark against Bayern, as Villarreal look to cause a huge upset and reach the semi-finals.

Chances could be at a premium for Villarreal, who will need Moreno to convert what comes his way to spring another surprise in the Champions League’s knockout rounds.

Bayern Munich have a collection of stars but Robert Lewandowski remains their biggest and best. The Champions League’s leading scorer this season and scorer of 85 goals in just 104 games in this competition, he will again be crucial to the Bavarian’s hopes of winning the trophy.

Eyebrows were raised when Bayern were held to a 1-1 draw at Red Bull Salzburg in the last-16, but a 7-1 second-leg thrashing of the Austrians – that included the earliest ever Champions League hat-trick from Lewandowski – saw the Bundesliga champions cruise into the last eight.

After having zero attempts on goal in the first-leg, Robert Lewandowski has a hat-trick against Salzburg in under 23 minutes 😱

The finest pure goalscorer in world football right now, Lewandowski has 45 goals in just 38 games for Bayern in all competitions this season and has reached 40+ in seven straight seasons for the Germans.

Stopping him is the unenviable task awaiting Villarreal in the last eight.