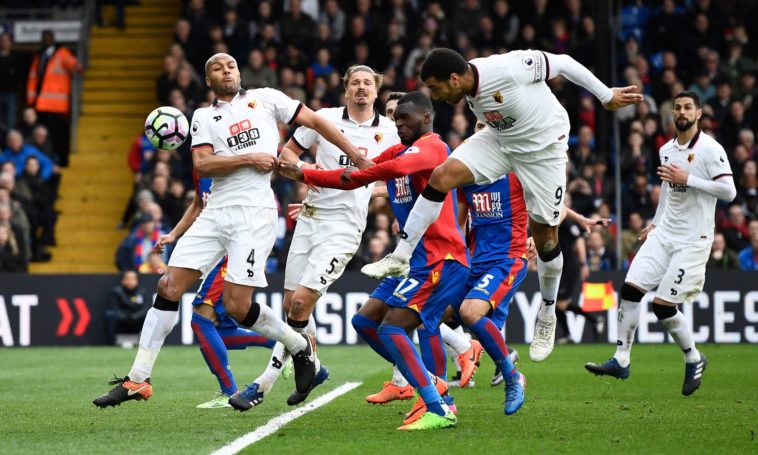 An own goal from Watford captain Troy Deeney gifted Crystal Palace their third straight win and clean sheet to pull them further away from the drop zone.

The first half had very few chances. Early in the game Palace should have been awarded a penalty through Wilfried Zaha. The winger danced through the Watford defence and as he entered the penalty area, an arm into the back from defender Craig Cathcart left Zaha on the turf. Referee Martin Atkinson, who awarded Palace a penalty in the Championship Play Off Final in 2013 against Watford, for a similar foul on Zaha, this time waved claims away.

The best chance of the first half fell to Yohan Cabaye. Great wing play again from Zaha, got him to the by line. His cross failed to find Christian Benteke and was cleared. The ball fell to Cabaye on the edge of the areas whose volley went just wide of the Watford goal.

Watford’s best chance of the half fell on the stroke of half time. Valon Behrami’s volley from the edge of the area went high and wide after the ball had fallen kindly to him.

The second half began just like first half did. Zaha again pulling the strings and testing the Watford defence. The first chance fell to the winger. Andros Townsend did well on the right hand side. His cross missed Benteke but fell to Zaha. The Ivorian tricked his way past Cathcart, but his shot went well over from a tight angle.

Tensions began to boil over as both sides looked for a breakthrough with Zaha again at the centre of the action. Zaha and Sebastian Prodl clashed in an incident which saw the Palace man very fortunate to get away with a swinging arm across Prodl.

The second coming together minutes later turned out to be the turning point in the match. Prodl fouling Zaha out on the left wing and receiving a yellow card for his troubles. From the resulting free kick came the breakthrough for Palace.

Cabaye’s fabulous set piece into the edge of the 6 yard box didn’t find a Palace player but instead the head of Troy Deeney. The Watford captain could do nothing about it, if he left it Benteke would be left with a tap in. The ball went in off the left hand side post with Cabaye taking the plaudits for a great cross.

Towards the end of the game, Watford substitute Abdoulaye Doucoure produced a great save from Wayne Hennessey in the Palace goal. Doucoure’s dipping shot from an acute angle made it even harder for the Palace keeper.

The result moves Palace four point above the drop zone, which will be much needed as they have to play all the top 6 teams in their remaining 10 fixtures.

Absolutely fantastic. Caused problems for the Watford defence throughout the game. Should have been awarded a penalty and should have had a goal to top a fantastic performance.

Please support Football Faithful by sharing this article on social media using the links below. Also, if you are interested in writing about Crystal Palace or Watford, please join our writing team.