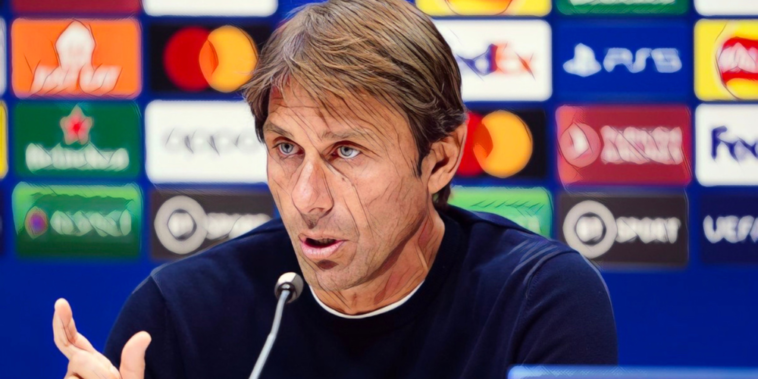 Antonio Conte insists Tottenham have ‘a lot of space for improvement’ and has discussed the club’s congested fixture schedule.

Spurs face Eintracht Frankfurt in the Champions League’s group stage on Wednesday evening as the north Londoners look to take a step closer to the knockout rounds.

Conte’s side are second in Group D, two points behind leaders Sporting and ahead of this week’s opponents, Frankfurt, on goal difference.

The clash continues a congested schedule for teams in European competition, with the winter World Cup having increased the pressure on the football calendar. Spurs face ten fixtures in all competition’s before the season’s pause from November 12.

“It is not simple. It is difficult for everybody, to play every three days is a big effort. We have to manage the situation in the best way possible,” Conte told his pre-match press conference.

“You know you have to rotate, but at the same time you need good results, otherwise there is criticism. Fingers crossed we have all the players available to rotate with good balance. It is important in every game to have a good balance and not lose your identity.”

The Italian discussed potential changes in formation, having moved to a midfield three for the win at Brighton on Saturday. Conte admits it is important that his side are flexible – without losing identity – as the club look to cope with the hectic nature of their schedule.

“We try to use the best formation but at the same time don’t lose our identity. This is very important. If you do something is going to change on the pitch.

“It can be for me a good option (three midfielders) in the future. We’ll see. We go game by game. When you play games every two to three days it’s important. At Brighton It was important to give Richy a bit of rest.”

Spurs are third in the Premier League at present and in a strong position to secure Champions League progression, having lost twice in 12 fixtures across all competitions this season. Conte has been pleased with his side’s season so far, but insists there remains ‘a lot of space for improvement’.

“We have a lot of space for improvement. I try to push my players every day. The staff and I work to do that. We know that if we improve every player then our level will be more up than down. The victory is important to enjoy football, to play with the right intensity and connect with the fans if they’re enjoying it.”

Conte confirmed that Dejan Kulusevski is closing in on a first-team return, having missed the last three fixtures with a thigh problem. The clash with Frankfurt will come too soon for the winger, though he is in contention to face Everton this weekend.

“I think Deki is almost ready. Yesterday he had an MRI and it was really, really positive but at the same time, I spoke to the doctors and they said tomorrow we can have 5% of risk. I don’t want to take risk because Deki is an important player for us. It would be stupid. We need patience and we’ve faced this situation well without him. Against Everton I think he will be able to play.”