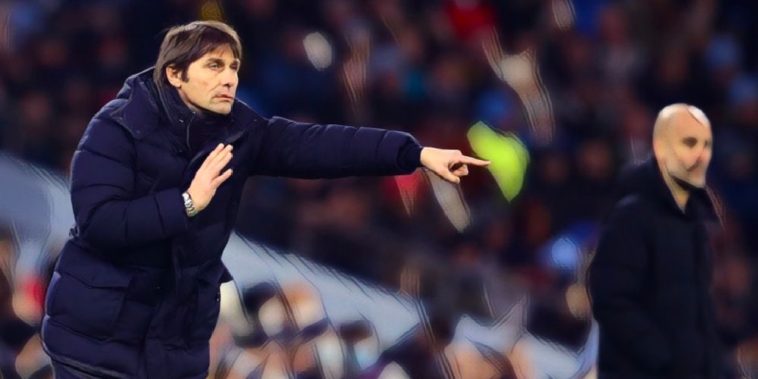 Spurs travel to face the Premier League champions on Thursday evening, the scene of one of their most memorable results of last season. Conte’s side stunned City with a 3-2 win at the Etihad, as Harry Kane scored a stoppage-time winner for the north Londoners.

Spurs have won four of the past five Premier League meetings between the sides and, ahead of their latest encounter, Conte spoke at his pre-match press conference on his side’s chances of a positive result.

“I remember the game [last season] and to win against Manchester City, you have to try not to make mistakes, because you know for sure, when you go to play against Manchester City, the ball possession will be 70 to 75% for them,” he said. “Then you have 20 or 25 percent of ball possession so in this period you have to be very good, to move the ball well and create chances to score.

“You know when you’re playing against I think the best team in the world at the moment it will be very difficult. Last season we were very good, showed great resilience. Also in this type of game, you need also to be a bit lucky to get a good result.”

Conte was asked on his side’s approach to the game, with Spurs having pressed high in the early stages of Sunday’s defeat to Arsenal before dropping in intensity after the break. The Italian discussed Spurs’ pressing and said their tactical plan depends on the characteristics of the opposition and his backline.

“The intensity of the game it depends also on the opponent. In the first half [on Sunday] we started to press high, but sometimes you find a good opponent. We work to overcome the pressure.

“You have to know very well that when you press high, you leave a lot of space at the back. If you a player like Saka, Martinelli or Mahrez, Foden or Grealish or Haaland, then you risk to concede a goal very high. Then you also have to consider the characteristics of your players, of your defenders.

“If we can stay very high and defend high with 50m behind us or it’s better for the characteristics of the players to stay a bit lower to cover more space and don’t be stupid to be so open and give the opportunity to your opponent to kill you.”

Conte also discussed Son Heung-min’s struggle for goals this season. The South Korean won the Premier League’s Golden Boot last season, but has just four goals during the current campaign – three of which came in a hat-trick against Leicester in September.

He has scored just once in his last ten games and Conte was asked whether Richarlison’s return to fitness can ease the pressure on Son.

“Yeah but also about this topic, before you [the media] said to me ‘maybe Richarlison is pushing Son and Son is not performing well,’ if I don’t remember wrongly. Now you’re telling me exactly the opposite,” he said, laughing.

“I want to stay here to ask every question but sometimes I also have questions that are completely the opposite that you asked me some time ago. Maybe you say that Sonny struggled with the pressure of having a player like Richarlison behind.

“I repeat, they are different seasons. The players are human and he’s a person. For sure if we talk about Sonny, last season he scored 25 goals. This season he’s not scoring so much. For us, it’s not good news this because we count on his goals. But then we are talking about not robots, about a person, a human.

“I’m the first to hope that Sonny starts to score with the pressure or without the pressure of other players like Richarlison behind. This is football. We have to try to face, the players and the coaches, different situations, positive or negative. The most important thing I see during the training session and in the games is that Sonny tries to do his best.