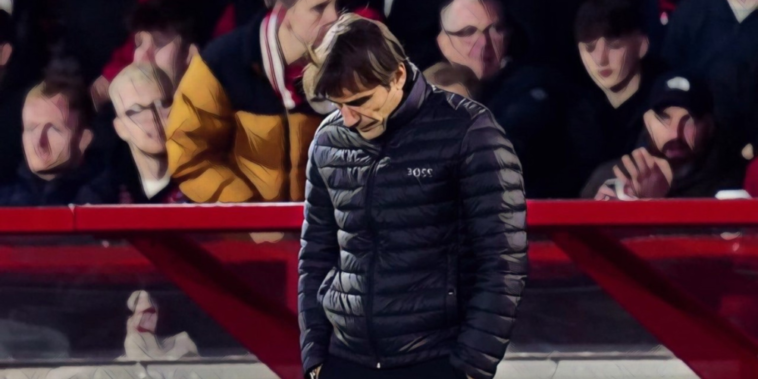 Antonio Conte has blamed Tottenham’s Carabao Cup exit to Nottingham Forest on tiredness after the north Londoners lost 2-0 at the City Ground.

Forest secured a deserved place in the competition’s fourth round after goals from Renan Lodi and Jesse Lingard earned Steve Cooper’s side a win. Spurs – who named a strong XI that contained Harry Kane from the start – were second best to a fresher Forest team who made nine changes from the weekend.

The Premier League’s bottom side opened the scoring through Lodi’s brilliant effort from the edge of the area, before Lingard headed in a second as Forest punished Spurs on the counter.

Conte was disappointed with his side’s exit from the competition and believes fatigue was a factor following a congested fixture schedule in the build-up to the World Cup break.

“For sure, there is big disappointment for the result, the loss,” he told the Spurs website. “The positive thing tonight was to see Richarlison again and Deki. I think they are ready for the game on Saturday against Leeds. This is good news for us.

“It’s very difficult to say something wrong, because the commitment was high, but we are at our 12th game (since 1 October) and, honestly, some players are really tired this moment.

“I tried to manage the situation in midfield, with Pierre and Bentancur to split the halves (Pierre played the first, Rodrigo the second), also Harry Kane, he gave me the availability to play this morning, because he was really tired.

“When you play so many games in such a short period of time it’s very difficult. For sure, maybe Nottingham Forest had more energy than us, but this can’t be a fault of my players, because about the commitment and the desire to do well, I can’t complain. Also, we spent a lot of energy, mentally and physically, against Liverpool.

“I repeat, we are at the end of a cycle that was really difficult, with many injuries, many players tired now and we need to rest and recover well because on Saturday, we have to be strong, together, me, the staff, the players on the pitch and in the stadium, because if we get a win, we finish this period in a good position, with our qualification in the Champions League and we can stay in the top four. If you ask me about another competition, maybe it was too much for us at this moment.”