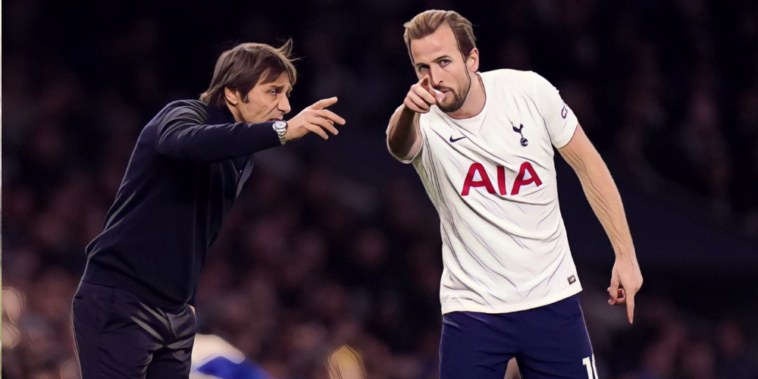 Antonio Conte says he wants to help Harry Kane get ‘better and better’ following the forward’s return to goalscoring form at Tottenham.

Kane has bounced back from a difficult start to the season to find his form in recent weeks, scoring seven goals across his past 10 appearances for Spurs in all competitions.

The 28-year-old netted twice as the North Londoners beat Brighton in the FA Cup last weekend and Conte has discussed his determination to ensure the England captain continues to improve.

“Surely when you have a player like Harry, you have to try to involve him in your tactical idea of football,” Conte told the media ahead of Spurs’ game against Southampton on Wednesday.

“He’s an important player for us and he has to be a point of reference when we develop our football offensively.

“We’re trying to work with him in many aspects. I think every single player can improve until he decides to stop his career.”

Conte called Kane world-class ahead of Spurs clash with the Saints, but insists there is always room for improvement from his squad.

Kane recently praised the impact Conte has had at Spurs since his appointment in November and the Italian says he and his staff are working hard to improve the club’s fortunes.

We still can't get over this @HKane strike 🤯@SpursOfficial #EmiratesFACup pic.twitter.com/s4z3ne9Zu0

“I repeat: We’re talking about a world-class striker and I’m trying to help him to become also better and better. Me, my staff on the physical aspect are working – but not only with him, with all the team.

“To reduce the gap, it’s very important to improve every single player in many aspects.”

Conte admits he was not concerned despite Kane’s lack of goals earlier in the season, insisting that the forward’s performance levels have always been ‘very high’ despite his struggle to find the scoresheet.

He is hopeful that Kane – who won the Premier League’s Golden Boot for a third time last season – can continue to fire, however, as Spurs look for a successful end to the campaign.

“Honestly I wasn’t worried before in the past when he didn’t score a lot,” Conte said.

“Because his performance was always very, very high, he played very well in every game for the team, he worked a lot for the team and is a fantastic player for me.

“He’s not selfish but now that he’s scoring I’m happy for him and the team. Because if he scores we have more probability to get three points or go to the next round in a trophy competition.”

Conte also discussed the club’s deadline day arrivals, insisting that he has little doubt that Rodrigo Bentancur and Dejan Kulusevski can adapt to the demands of the Premier League after arriving from Juventus.

“We are talking about two strong players physically and with good quality,” Conte added.

“They can play in this league. You know very well this league is not for all. You have to match quality with physicality to play this league.

“Bentancur is in top form. Kulusevski, we are working very hard because he has an important engine and they are important players for us who can help us for the rest of the season.”