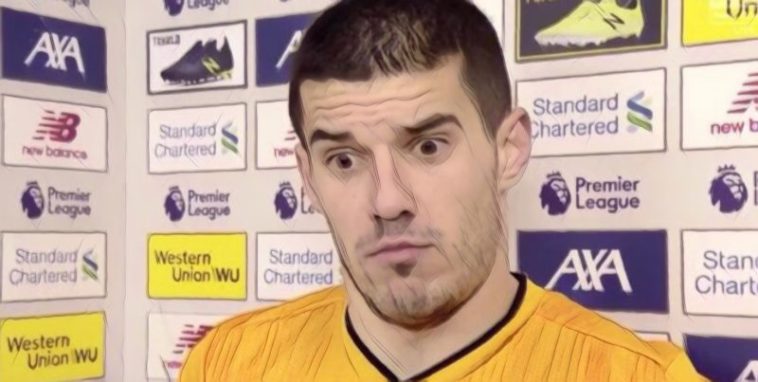 Conor Coady has blasted the use of VAR and says the technology ‘is not working’ after Wolves were beaten 1-0 at Liverpool in controversial circumstances.

Sadio Mane scored the only goal of the game in a contest dominated by the use of video assistant referees, the goal overturned following consultation with VAR after referee Anthony Taylor had initially disallowed the effort for a handball against Adam Lallana in the build-up.

However, the ball also appeared to accidentally brush the hand of Virgil van Dijk earlier in the phase of play, the Dutchman then sending a long pass forward in the direction of Lallana before Mane opened the scoring.

Wolves then saw an equaliser chalked off, winger Pedro Neto seeing his celebrations cut short following a VAR check, the goal disallowed following a marginal offside against Jonny prior to the 19-year-old firing home.

Coady admits his side feel aggrieved following the defeat, and says VAR is simply not working with players not given answers on the pitch surrounding major decisions.

Speaking to Sky Sports post-match, the Wolves captain said: “We feel massively hard done by. I can’t get my head around it. It is ridiculous.

“For me it is not working. Some people are saying it gets the right decision but we’re the players on the pitch and it doesn’t feel right to me.

“Anthony Taylor is a great fella to speak to but I ask a question and I don’t get an answer.

“We thought Van Dijk handballed it, but the referee tells me Van Dijk is too far away. He played the pass.

“VAR is affecting the game, you can hear the fans singing about it. No-one has asked us about it.

“It is still confusing, I can’t get my head around it, you don’t get answers on the pitch.”

Wolves drop to seventh after the latest round of fixtures and travel to Vicarage Road to face a resurgent Watford on New Year’s Day.

Read Also – Best of the 2010’s: Premier League Team of the Decade