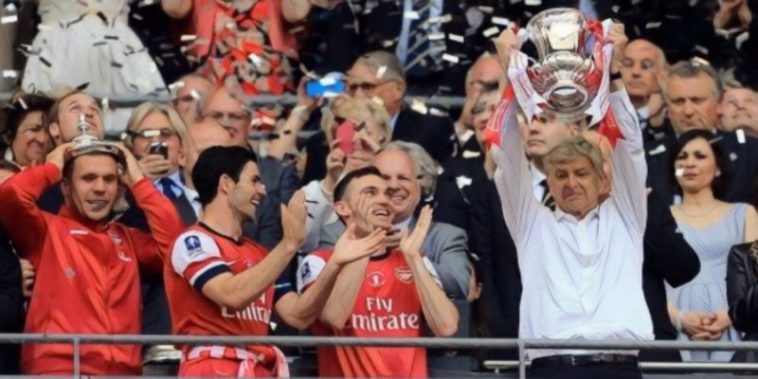 Each of the four remaining sides have a storied history in the competition but as they seek to make next month’s final at the national stadium, we’ve decided to look back at some of the most successful teams in FA Cup history.

Here are the six clubs with the most appearances in the FA Cup final:

Everton’s loyal fanbase may have been starved of success for more than two decades but the Merseyside club remain amongst the most successful sides in FA Cup final history, making 13 appearances.

The Toffees have lifted the famous old trophy on five occasions, their first coming way back in 1906 and their most recent a shock victory over Manchester United in 1995 – Paul Rideout’s header sealing Everton’s most recent major honour.

The Blues’ tally of 13 final appearances also agonisingly includes eight showpiece defeats, including memorable losses to Merseyside rivals Liverpool in 1986 and 1989 and their most recent final loss to Chelsea in 2009 – Louis Saha’s fastest ever FA Cup final goal after just 25 seconds not enough to win the trophy for David Moyes’ side.

Everton fans may count themselves fortunate in comparison to those who follow Newcastle United, the Magpies without a major honour for over half a century despite a proud record in world football’s oldest domestic competition.

The North East outfit have reached 13 finals throughout their history and lifted the trophy six times, though their most recent came in the mid-fifties with a 3-1 victory over Manchester City at the old Wembley.

The victory marked a successful period in cup competition for Newcastle, who won the FA Cup for the third time in just five seasons. Final appearances for the side have been less common since those glory days, however, though they did reach back-to-back finals in the late nineties – both occasions ending in heartbreak with defeats to Arsenal’s double-winners in 1998 and Manchester United’s treble-winning side the following year.

The most successful side in FA Cup history since the turn of the millennium, Chelsea have enjoyed a fine record in the competition with eight final appearances – including six victories – since 2000.

That haul has taken Chelsea to a record of 13 FA Cup final appearances, with only three sides in the tournaments history having ever featured in more showpiece occasions.

The west London side lost their first final to Sheffield United at Old Trafford in 1915, before winning the competition for the first time with a replay victory over Leeds in 1970.

Chelsea’s greatest successes have come during the Roman Abramovich era, however, winning five FA Cups since the Russian’s billionaire investment including three trophies in just four seasons between 2007 and 2010.

Liverpool are the most successful club in English football history having won a record-extending 48th major honour with Premier League title success this season, the club’s extensive collection of silverware boosted by a fine record in the FA Cup.

The Reds have reached 14 finals throughout their history and won exactly half of those appearances, their most recent being a Steven Gerrard-inspired success following a thrilling final against West Ham in 2006.

Liverpool won the trophy for the first time in 1965 but have been crowned winners on just two occasions since the turn of the millennium, whilst their most recent showpiece appearance ended in defeat as Didier Drogba’s goal sealed victory for Chelsea in 2012.

Amongst the Merseyside club’s most memorable final defeats also include Wimbledon’s ‘Crazy Gang’ producing a historic upset in 1988 and Eric Cantona sealing cup success – and a domestic double – for Manchester United in 1996.

No side has ever reached more finals than Manchester United, with the Red Devils seeking to reach the Wembley showpiece for a 21st time when they face Chelsea in the last four on Sunday.

United reached the final for the first time in 1909 and secured victory over Bristol City, winning a further four FA Cups before Sir Alex Ferguson won the first trophy of his Old Trafford reign by defeating Crystal Palace in 1990.

That success sparked a glittering period for the side who won a further three FA Cups during the nineties, including domestic doubles in 1994 and 1996 and a historic treble-winning season – winning the Premier League, FA Cup and Champions League – in 1999.

United’s 12 victories has been mixed with eight defeats, losing their last final appearance two years ago – a 1-0 defeat to this weekend’s opponents, Chelsea.

Level with Manchester United for final appearances are record winners Arsenal, who will be hoping to kickstart Mikel Arteta’s reign in north London by adding a record-extending 14th FA Cup to their collection this season.

Arsenal won the trophy for the first time by beating Huddersfield in the 1930 final at Wembley, but it was the arrival of Arsene Wenger as manager which saw the club become the most successful in FA Cup history.

The Frenchman lifted the FA Cup on a record seven occasions throughout his time with the Gunners, including winning domestic doubles in both 1998 and 2002. Wenger’s impressive haul was added to with three victories in just four seasons before his departure from the Emirates – eclipsing Manchester United’s previous landmark for cup successes.

Despite losing seven finals in total, Arsenal have lost just one showpiece in the past four decades, Michael Owen’s brace securing a comeback victory for Liverpool in the 2001 final in Cardiff.