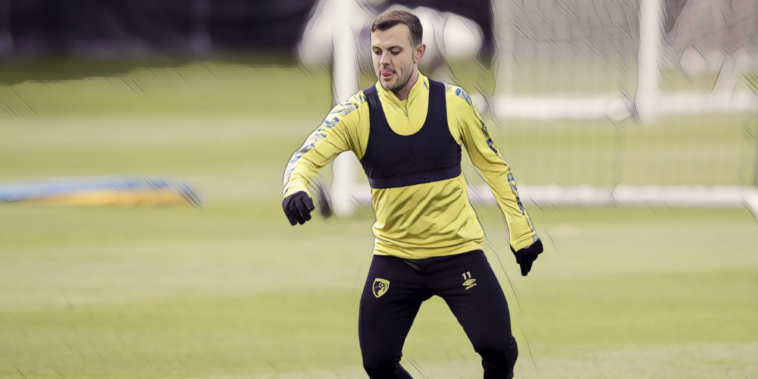 Jack Wilshere has opened up on the frustrations of being without a club and being considered ‘an injury waiting to happen’ by prospective employers.

Wilshere is without a club after leaving Bournemouth last summer, with the midfielder having made 17 appearances across all competitions for the Championship side last season.

The 29-year-old has been training alone since leaving the Cherries and has opened up on both his frustrations and public perception over his fitness, having struggled to attract offers despite his status as a free agent.

He recently enjoyed a spell training in Italy with Serie B side Como 1907, but was unable to agree a deal due to his non-EU passport.

Wilshere – who has earned 34 caps for England – has seen a promising career stall following a succession of injury issues, having been tipped as a future star for club and country after emerging from the academy ranks at Arsenal.

The midfielder has been in talks to train with his former side, though has admitted that perceptions over his injuries have put clubs off from signing him.

“I think it’s a perception, and I’ve had this opinion from a few clubs; ‘great player, but an injury waiting to happen’,” he told the Under the Surface podcast. “I haven’t been injured since before lockdown, and it was not a serious injury. I’ve trained every day.

“It’s frustrating and it sort of breaks your spirit as well… especially when you’re training on your own. You have to run, and it’s hard and it’s boring, and then to get that answer it’s like, ‘well why am I doing this? Why am I breaking myself every day, waiting for that opportunity to come, when I’m just getting answers like that?’ That’s why I went to Italy as well. It was like a fresh start without that perception. It’s a new book almost.”

Wilshere has spoken of his desire to get the ‘buzz’ of playing football back, admitting the difficulties in explaining to his increasingly football aware children that offers for his services from clubs have not arrived.

“I want to feel that buzz again going on to the pitch and playing football,” he said. “I’ve got a 10-year-old who is football mad, he loves football and he watches Sky Sports News, he sort of understands football and that’s probably one of the toughest parts about explaining to him what’s going on because he’d always ask me if I had a club yet or if anyone wanted me and I’m like ‘no’. You have to be honest with him.

“I said to the Mrs, look just say to me when it’s enough: ‘Stop going to train on your own and maybe try and focus on something else.’”

Wilshere admitted that he has questioned whether his career as a footballer is now over, but reiterated his belief that he remains capable of operating at the ‘top level’ and has urged sides to give him an opportunity to prove his worth.

“Yeah 100 per cent, with the situation I’m in and people say no or not even giving me a chance,” he added when asked if he had thought his career could be over.

“It’s normal you’re going to have those thoughts. And then to get the support of players you’ve played with or players you’ve watched saying I can’t believe you’re without a club; it gives you confidence. I think I can play at the top level. The very top. Give me a chance, let me prove myself to you… show you that I’m fit.”

Read – A tribute to Ricardo Quaresma, the Trivela King