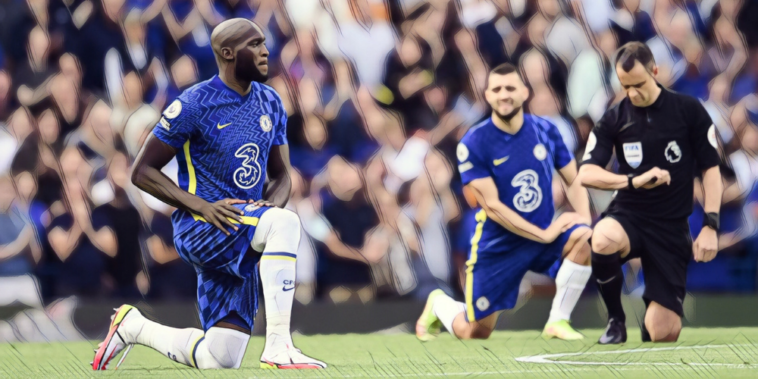 Romelu Lukaku has questioned the power of taking the knee and has called for meetings between footballers and social media companies to help combat racism and discrimination.

Premier League footballers have taken the knee since the tragic death of George Floyd in the USA, a pre-match symbol in the global fight against racism and discrimination.

However, Chelsea forward Lukaku has suggested that ‘stronger positions’ need to be taken, with players still being subjected to abuse despite the heightened awareness.

Lukaku’s comments come after Chelsea teammate Marcos Alonso revealed he will be opting against taking the knee in future matches, believing it has lost its impact.

“I think we can take stronger positions, basically,” Lukaku told CNN. “Yeah, we are taking the knee, but in the end, everybody’s clapping but … sometimes after the game, you see another insult.”

Lukaku has called for meetings between social media executives and leading Premier League footballers, alongside the FA and PFA, to discuss a better pathway for preventing the sickening abuse and protecting players.

“The captains of every team, and four or five players, like the big personalities of every team, should have a meeting with the CEOs of Instagram and governments and the FA and the PFA, and we should just sit around the table and have a big meeting about it,” he said.

“How we can attack it straight away, not only from the men’s game, but also from the women’s game.

“I think just all of us together and just have a big meeting and have a conference and just talk about stuff that needs to be addressed to protect the players, but also to protect fans and younger players that want to become professional footballers.”

The Belgium international insists that social media companies are capable of introducing methods to stop the abuse, urging those in a position of power to do more in the fight against discrimination.

“If you want to stop something, you can really do it,” he said. “We as players, we can say: ‘Yeah, we can boycott social media,’ but I think it’s those companies that have to come and talk to the teams, or to the governments, or to the players themselves and find a way how to stop it because I really think they can.”

The whole point of social media is for all the losers in the world to talk shit about other people. If you stop people being able to vent on social media, there’s no point to social media. Hopefully that’s exactly what happens and Facebook, Twitter and the rest of these toxic, censorial, racist, cancel culture cesspools will be shut down for good.