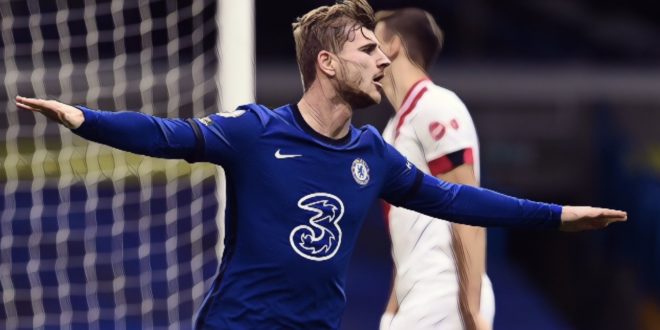 Timo Werner officially announced himself in the Premier League with a superb showing for Chelsea against Southampton, although Frank Lampard’s sides defensive weaknesses once against cost the west London side after they played out an entertaining 3-3 draw with Southampton.

£52 million summer signing Werner had somewhat surprisingly failed to score in his first four Premier League outings, but opened his account with a superb individual effort on 14 minutes. The German forward brilliantly dummied a Ben Chilwell pass to flummox his man, before racing into the Saints box, evading several challenges and firing low past Alex McCarthy from 14 yards out.

On 27 minutes Werner would net his second and once again it was a finish dripping with quality, the 24-year-old striker racing onto a superb ball around the corner from Jorginho, holding off the challenge of Jan Bednarek, touching the ball over the onrushing ‘keeper before calmly heading home into the open net.

Chelsea looked to be cruising to a comfortable win as the first-half drew towards a close, but the Saints would be handed a lifeline two minutes before the break, talisman Danny Ings finishing clinically after being slipped through by strike partner Che Adams.

Ralph Hassenhuttl’s side would then pull level 12 minutes into the second-half, Che Adams pouncing on the latest Kepa Arrizabalaga sh*tshow to fire into the roof of the net from close range.

Southampton’s would be level for only a matter of minutes though, Werner this time turning provider to tee up countryman and fellow summer signing Kai Havertz for a simple tap in from six yards out.

The Blues dropped off as they looked to hold out for the three points, but their inability to defend set-pieces would once again be exposed in injury time, with Jannik Vestergaard glancing home a header to seal a point for the away side.

Speaking afterwards Werner admitted he was happy to open his account in the English top-flight, but conceded that Chelsea will struggle for titles unless they improve their defensive displays.

“The first half we played very well. When you get a goal two or three minutes before half-time it is not easy. You have to think with a clear head. Southampton make a lot of pressure on us and pressed us high. We gave them too much in terms of opportunities. We have to win the game,” Werner told Premier League Productions.

“I don’t know if we have a problem but the last three games we concede six goals and it is not where we want to be, to compete for titles. In Germany we always say defence wins titles. If we concede so many it is hard to win games and win titles.”

Chelsea kick off their Champions League campaign with a home clash against Sevilla on Tuesday, before travelling north to face old foes Man United in the Premier League next weekend.