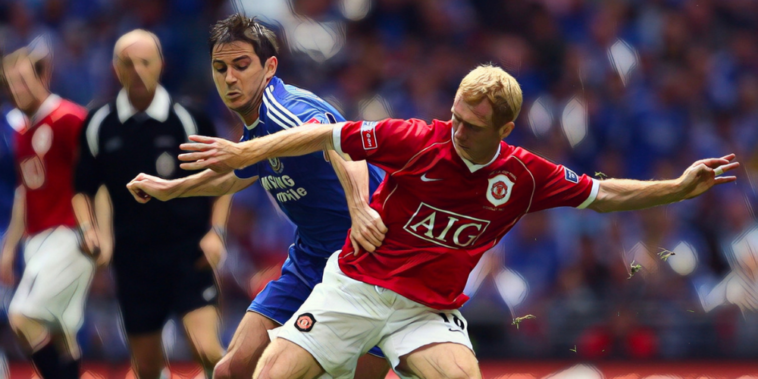 Manchester United face Chelsea tonight in a Premier League fixture at Old Trafford, the two most successful sides in the history of the division meeting in the latest instalment of their rivalry.

Both sides have featured some of the finest players in Premier League history throughout the years. United dominated English football under Sir Alex Ferguson, before Chelsea emerged as a new superpower of the game following Roman Abramovich’s takeover in West London.

Ahead of their meeting tonight, we’ve decided to compile a dream XI made up of players from both sides throughout the Premier League era.

Perhaps the most competitive position on this team sheet, the two clubs have played host to some of the goalkeeping greats of the Premier League era.

Chelsea’s Petr Cech, holder of the record of most clean sheets in a single season and of all-time, is unfortunate to miss out, as is current United stopper David de Gea who has been named as the division’s finest on five occasions.

Despite fierce competition we’ve chosen to select former Manchester United ‘keeper Peter Schmeichel in goal, the Dane often held up as the standard-bearer for elite goalkeepers in the modern game.

A formidable last line of defence, Schmeichel would win five league titles, three FA Cup‘s and the Champions League during a glittering eight-year spell at Old Trafford, captaining the side during the latter triumph as part of a famed treble-winning season in 1999.

Named as Premier League Player of the Season in 1995/96, he remains the only goalkeeper to have won the award.

Edging out United stalwart Gary Neville for a place in our side is hulking Serbian defender Ivanovic, the powerful full-back establishing himself as a firm fans’ favourite at Stamford Bridge during a trophy-laden nine-year spell at Chelsea.

Ivanovic initially struggled to make an impact and failed to make a single first-team appearance during his first six months at the club, before finding his feet in English football and developing into one of the most reliable defenders of modern times.

Equally comfortable at right-back or centrally, the burly star made almost 400 appearances in all competitions in Chelsea colours, winning three league titles, three FA Cups and the Champions League amongst his extensive list of honours.

Twice named in the PFA Team of the Year, he also often popped up with vital goals, none more so than his stoppage-time winner in the Europa League final in 2013.

One of the Premier League’s all-time great centre-backs, Ferdinand’s talents saw him twice become the most expensive defender in history before his 23rd birthday.

Quick, strong, and good on the ball, the latter of those moves saw Ferdinand arrive at Old Trafford in a British transfer-record deal, joining from rivals Leeds and becoming a cornerstone of a side that dominated English football.

Often described as a ‘Rolls-Royce’ of a footballer for his seemingly effortless displays, Ferdinand spent 12 seasons at the club, winning nine major honours including six league titles and the 2008 Champions League.

Few players have had as great an influence on Chelsea’s emergence as a powerhouse of English football as their former leader, Terry coming through the club’s academy ranks to become the most successful captain in the Blues’ history.

Regarded as one of the great defenders of his generation, Terry captained the club to five Premier League titles amongst his list of accolades, whilst he would won four FA Cups, three League Cups and both of Europe’s leading competitions during his Stamford Bridge career.

Named as the PFA Player of the Year during the club’s drought-ending title success in 2004/05, Terry formed part of the side that conceded an all-time record low of just 15 Premier League goals.

He remains one of just three defenders alongside Paul McGrath and Virgil van Dijk to be crowned as the division’s best player during the Premier League era.

A player for who public perception perhaps prevented him from receiving the accolades that his talent deserved, Cole is arguably the finest full-back the Premier League has seen and one of the most decorated English players of all-time.

His controversial move to Chelsea from London rivals Arsenal drew much criticism, though it proved a decision that was vindicated following a wealth of success at Stamford Bridge.

Cole won eight major honours including two league titles and the Champions League during his spell with the West London side, making 338 appearances in all competitions and twice being named as the club’s Player of the Season.

A model of consistency, Cole mixed attacking threat with excellent one-v-one defending, providing a formidable opponent for even the most talented of Premier League wingers.

Keane was a ferocious competitor who shared a desire to win that few can match, the Irishman among the best Premier League midfielders of all time.

One of the greatest captains the league has seen, Keane was often the inspiration behind some of the club’s greatest triumphs, acting as Sir Alex Ferguson’s on-field voice and establishing himself as the undoubted leader of the Scot’s team.

A dynamic presence of energy and full-blooded commitment, Keane was a complete midfield player who became the driving force behind Ferguson’s side, winning a PFA Player’s Player of the Year and FWA Footballer of the Year double in 2000.

Few can also forget his inspired performances the year previously as United reached the 1999 Champions League final, whilst he won 17 major honours during a glittering Old Trafford career.

Described as the best midfielder of the past 20 years by Barcelona great Xavi, Scholes is a player not short of admiration from his footballing peers.

Part of a collection of academy graduates who formed the basis of a United side that dominated the English game, a quick search of sporting testimonials of the former England midfielder demonstrates just how highly he was regarded.

Few midfield talents have possessed the technique, intelligence or passing range of the Oldham-born star, Scholes evolving from goalscoring midfielder into deep-lying playmaker as he reached the twilight of his career.

Scholes spent his entire career with the club and make 718 appearances in all competitions, his list of accolades include 11 league titles, three FA Cups and two Champions League titles.

See also – 10 of the best quotes about Paul Scholes

Incredibly the sixth-highest scoring player in Premier League history, Lampard’s goalscoring exploits from a central midfield position are unlikely to ever be matched.

The former England international scored prolifically during Chelsea’s successes in the Premier League era, netting double figures for league goals in ten consecutive seasons between 2004 and 2013, including a career-best 22 league goals as the Blues secured a domestic double in 2010.

It was Lampard’s goals that secured the club’s drought-breaking title triumph in 2005, scoring twice in the clinching victory at Bolton before being named as the Football Writer’s Footballer of the Year.

One of just three players alongside Ryan Giggs and Wayne Rooney to have registered 100+ Premier League goals and assists, Lampard became the greatest goalscorer in Chelsea’s history during a career that delivered three league titles, four FA Cups and the Champions League amongst his honours.

Widely acknowledged as one of the greatest footballers to have ever lived, Cristiano Ronaldo would begin his ascent to superstardom during a memorable six-year spell in the Premier League.

Arriving as a raw but talented teenager, Ronaldo evolved into one of the best attacking talents on the planet, inspiring United to three successive league titles and delighting the crowds with his tricks, flicks and dazzling displays.

The second of those title triumphs came alongside European glory, as Ronaldo hit 42 goals in all competitions to be awarded the Ballon d’Or for the first time in his career – including a vital goal in their Champions League final success over Chelsea on a rain-soaked night in Moscow.

He won a PFA Player’s Player and FWA Footballer of the Year double in successive seasons in 2007 and 2008, before departing for Real Madrid in a world-record £80 million deal the following year.

Ronaldo returned to Manchester United in 2021, with the five-time Ballon d’Or winner entering the Premier League’s ‘100 club’ during his second spell at Old Trafford.

The most decorated footballer in the history of the English game was a shoe-in for our side, having enjoyed a career of unprecedented success and one unlikely to ever be matched.

Another of United’s famed academy graduates, Giggs emerged as a teenage sensation, possessing electric pace and a seemingly nonchalant ability to ghost past opposition full-backs at will.

As his career progressed, he evolved from a flying winger into a more central role, his honours including a barely believable 13 league titles, in addition to four FA Cups, three League Cups and two Champions League titles.

No player in history has ever made more than his 963 appearances in a United shirt, his longevity and quality leaving him with 162 Premier League assists, the most in the competition’s history and a huge 51 more than second-placed Cesc Fabregas.

Wayne Rooney and Didier Drogba are two of the unfortunate names to miss out as our sole striker, but whilst many players have scored more goals than Cantona’s modest tally of 64 league goals for United, perhaps no forward in the Premier League era has ever had such a transformative impact on the fortunes of a club.

The enigmatic Frenchman arrived from rivals Leeds and proved to be the catalyst behind their successes in the early part of the Sir Alex Ferguson era, bringing a swagger and style that has his name still regularly sung on the Old Trafford terraces more than two decades after his departure.

He helped end the club’s 26-year wait for a league title in his debut season to become one of the most iconic players in Premier League history, winning the PFA Player’s Player of the Year award in 1994 before winning the FWA Footballer of the Year gong two years later.

Read – Eric Cantona and how he made us feel