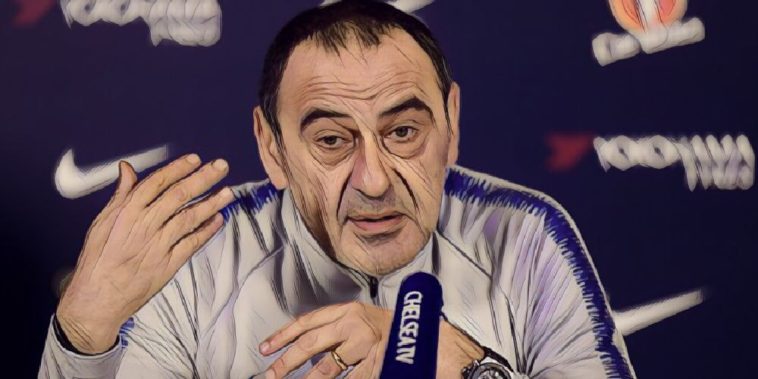 Chelsea manager Maurizio Sarri has said that Manchester City should be an example for every club as he prepares to face the league leaders this weekend.

City romped to title glory last season, playing a wonderful brand of football along the way, becoming the first side to reach the 100 point mark in the Premier League era.

While they have already dropped more points than they did in the entirety of last season, Man City regained their place back at the top of the pile with the 2-0 over Everton on Wednesday, as they look to become the first team in a decade to defend their crown.

There has always been a healthy level of respect between City boss Pep Guardiola and his Chelsea counterpart, Maurizio Sarri, with Guardiola previously saying that the Italian’s ‘Sarri-ball‘ football is “as good as a drink in the sun.”

Now, with the pair due to meet in Sunday afternoon’s titanic clash at the Etihad, Sarri spoke about his relationship with the former Barcelona and Bayern Munich boss, saying that the league leaders are a shining example.

“We have a good relationship. In the summer we had dinner together, I hope he speaks well about me as a coach,” Sarri said in his pre-match press conference.

“The Premier League is very difficult. It is not easy to win or to get the Champions League. We need to work, but I think they are an example for every club.”