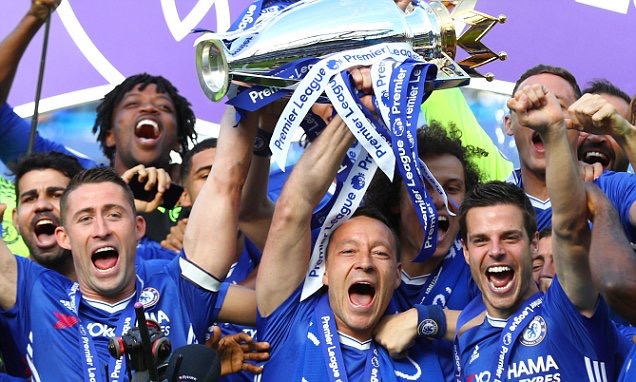 Chelsea celebrated their fifth Premier League title and John Terry’s farewell with a goal-scoring party at Stamford Bridge as the Blues take out Sunderland with a 5-1 win on Sunday.

The West London club continued to play at their best with nothing but pride on the line, culminating in Terry and vice-captain Gary Cahill lifting the trophy together.

Fans were shocked in the third minute as Javier Manquillo at the back post smashed the ball into the top of the net after it was deflected into his path after a Seb Larsson free-kick. Willian quickly responded in the eighth minute with a powerful shot of his own that bounced off the hands of Jordan Pickford and into the net.

Terry was subbed off in the 26th minute as one of Antonio Conte’s surprises to give the captain the standing ovation he deserved after 22 years of loyalty to the club. He passed the torch to Cahill by giving him the armband, the same one that he has worn throughout the season as Chelsea’s on-field captain.

Any outcome would not have affected the outcome of the table, but Chelsea continued to pressure Sunderland. Hazard scored the winning goal in the 61st minute after Diego Costa’s pass left the Belgian winger in a one-on-one situation with Billy Jones. A little shimmy to the left gave Hazard space to smash the ball into the far post past Pickford for Chelsea’s second goal.

Pedro, who came on for Hazard in the 70th minute, added a third for the Blues, and Michy Batshuayi made the most of his limited minutes by scoring two late goals.

The Premier League is over for 2016–17. Chelsea and Sunderland finish on opposite sides of the spectrum, and the Black Cats are relegated to the EFL Championship next season. Chelsea are the first team to win 30 Premier League games in a season. They look to close out the season with a double when they play in the final of the Emirates FA Cup against Arsenal on Saturday.

Here are some talking points about the match.

No one on the corner has a swagger like us

Chelsea has played with a swagger since Cesc Fabregas was substituted off for Marcos Alonso in the 54th minute of the match between Arsenal and Chelsea earlier in September. This change marked the switch to a back-three formation after giving up three goals in the first half of the match at Emirates Stadium, and a winning run that lasted until the loss to Tottenham in January.

This match was a metaphor of the season for the Blues: dominant until the very end. Sunderland opened the scoring early, but trailing did not affect the psyches of the home team who responded quickly with goals of their own; and the goals didn’t stop until the final whistle.

This is different from Chelsea squads in the past who defended for their lives in order to nick a goal on a counter attack. This Chelsea XI has dismantled teams with precision and efficiency without letting a foot off the gas pedal.

Chelsea finished the match against Sunderland with 72% possession, shooting 28 times with eight hitting the target and five going into the back of the net. Chelsea controlled the match much like they controlled the Premier League table. The Blues won the title when they earned 83 out of 96 points after early losses to Liverpool and Arsenal to start the season.

Other clubs may have put pressure on the new champions, but destiny was always in the hands of the West London club full of swagger that everyone feared.

Antonio Conte selected a fairly strong lineup for this match, which was surprising because Sunderland are at the bottom of the table, and the match had no significance to affecting any outcomes. One would assume that Conte would want to let others play who haven’t had as many minutes on the pitch this season.

In the midst of all the celebrations to conclude a wonderful Premier League season, Chelsea still have to prepare for a big match against Arsenal for the FA Cup. A trophy is on the line in a London derby at Wembley Stadium, and Conte needs his players prepared for it.

This match against Sunderland was seen as a dress rehearsal of sorts. A strong lineup was played to keep momentum going forward because it’s in Conte’s blood to keep his players hungry for wins. There is no time to sit back and relax with the Italian manager, and he instilled this spirit into the Chelsea squad.

Diego Costa received a yellow card during the match, and he was subbed off in the 62nd minute to ensure he could play in the final on Saturday. Eden Hazard was also substituted in the 70th minute, presumably to protect his health going into the clash with Arsenal.

Conte is a conductor of orchestras, and you see that with the precision of Chelsea’s attack and defence. There is no better way to practice than in a match environment, and this match was treated as such.

With his players ready, Chelsea looks to finish the season on a high note by defeating Arsenal in hopes of lifting one more trophy over their rivals in North London.

Man of the Match(es)

I’m nominating the man of the matches—the man of the season—because one Chelsea player has played every single minute of this title-winning campaign.

Cesar Azpilicueta has stood out all season by stifling opposing attacks in a center-back position that’s not natural to him. However, you think he had played their all his life when you watch him.

The Spanish defender, affectionately known as “Dave” by Chelsea fans who can’t pronounce his last name, is a champion of champions for all the work he put into the season. He is the man of the match and the season.

Congratulations to Chelsea for winning the Premier League. Now, on to the next one with Wembley in sight.