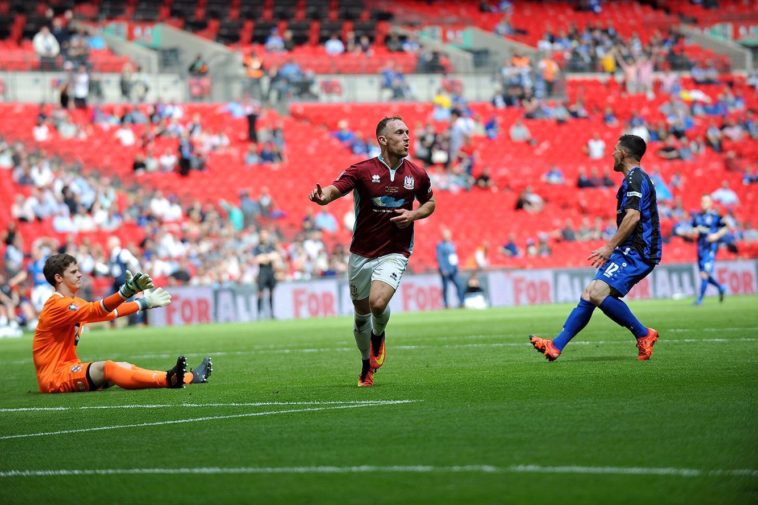 South Shields lifted the FA Vase after a comfortable 0-4 victory against Cleethorpes Town.

Dillon Morse then made it 0-2 after Robert Briggs floated in a free kick for the defender to head home from close range in the 80th minute.

Then a quick-fire double from David Foley sealed the game sending South Shields fans into jubilation as he latched onto Michael Richardson through ball and slotted the ball past the onrushing Liam Higton after 86 minute then smashed an effort home from outside the box 2 minutes later.

South Shields began the game strong as a Wayne Phillips free kick found the head of Andrew Stephenson who headed narrowly wide in the 5th minute.

Three minutes later, Cleethorpes goalkeeper Liam Higton was forced into the first of many saves when Carl Finnigan latched onto Gavin Cogdon through ball. However, the shot was straight at the keeper.

Cleethorpes were nearly ahead in the 25th minute with their first chance of the game after Brady Robertson forced Liam Connell into a good low save.

South Shields struggled to break down a resolute Cleethorpes defence as Finnigan and Foley both saw efforts blocked.

The Mariners then converted their penalty and were unlucky not to be two-goals ahead after a driving run and shot from Cogdon was pushed against the post and the bar.

After half-time Cleethorpes keeper Higton made a fantastic save to prevent David Foley’s 25 yards strike from making it 0-2 just two minutes after the restart.

The Owls then had their only real chance of the game when Brody Robertson went through on goal but was denied by a last-ditch tackle by Alex Nicholson.

South Shields calmly controlled the game before bursting into life after their second goal. However, from there the game was very much over for Cleethorpes.

The South Shields co-manager won the trophy for the second time in three years as his side beat Cleethorpes Town 0-4 and he spoke exclusively to Football Faithful after the game.

“It’s every managers goal to get to Wembley, never mind to win there. To have won this trophy twice in the last three years is really special to me.”

The Mariners are well known in the North East for having a fan base and financial support far above their level and when asked about the fans impact today, Fenton said

“The fans gave us a real lift when we needed it. There were times when the condition took its tole on us and the fans really lifted us”

The Mariners scored just before half time and controlled the second half. Fenton revealed in his team talk:

“I told the lads to play their game, we controlled the game we just needed to raise our levels and Cleethorpes just couldn’t handle that.”

And on the importance of their second goal he said:

“For 25 minutes of the second half, i don’t think we played very well. However, when the second goal went in, we upped our game and everyone had the chance to shine.”

Wayne Phillips: The midfielder calmly controlled the game with a good range of precise passes.