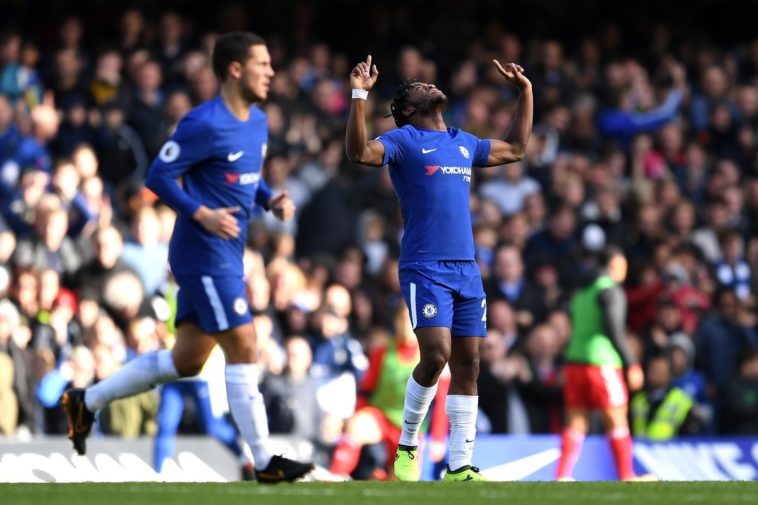 Key substitutions of Michy Batshuayi, Willian, and Davide Zappacosta brought back Chelsea from the brink of defeat in a 4-2 victory of Watford on Saturday.

It looked like it was going to be another one of those days, but Antonio Conte found a way to complete the comeback. Batshuayi scored two goals coming off the bench to lead the Blues into top four of the Premier League table.

Here are five things we learned from Chelsea’s win over Watford.

With Victor Moses dealing with a hamstring injury, Zappacosta was called upon to lock down the right flank in the Champions League matchup against Roma. He was always up the pitch, ready to put a cross into the box when needed, but he was largely missing in defense. This caused a near collapse in the mid-week tie that ended in a 3-3 draw.

Conte must’ve seen the problems, and he wasn’t going to risk another defensive blunder after losing to Manchester City and Crystal Palace. Rather than going back to Zappacosta, the manager rejigged the lineup moving César Azpilicueta to right wingback and including Antonio Rüdiger to the back line.

The lineup change worked in the beginning. Rüdiger had two key stops within the first three minutes, and Azpilicueta had a great balance of attack and defense. However, Watford eventually figured out the way to cut through the Chelsea defense, and took the lead in the second half. It was Zappacosta’s substitution that saved the day when the Blues’ game plan changed.

Quicker transitions for the Blues

The biggest downfall of Chelsea this season is the lack of speed when transitioning between attack and defense. Other clubs have started to notice that the West London build up is slow, and opponents have time to set up before an attack could be generated. Teams also know to attack as Chelsea haven’t been able to get back into defense quick enough to keep the fans calm.

Today was a different story for the Blues. When Chelsea won the ball, they quickly passed it to Eden Hazard, Álvaro Morata, and Pedro. Unfortunately, Morata wasn’t at his best today, but it was refreshing to see a quicker tempo to the attack.

The little things may not make a big impact in the game, but mistakes can add up. Opponents can pounce on errors and make you pay. Watford did just that to Chelsea.

David Luiz made an unnecessary foul on Richarlison during stoppage time of the first half. While fouls happen from time to time, this one allowed Watford to bring all their players forward, and Chelsea were pinned into their own half while Watford relentlessly attacked. This eventually led to the long throw-in into Chelsea’s box and Abdoulaye Doucouré’s goal, giving Watford momentum going into the second half.

Pressure was mounting on Chelsea, and Tiémoué slightly crumbled when he failed to control the ball in the middle of the pitch, allowing Roberto Pereyra to run with the ball for Watford’s second goal of the match. Bakayoko wasn’t the only one at fault, as Cesc Fàbregas was flat-footed and failed to cover for him, allowing Pereyra to run through the midfield.

“Batsman” to the rescue

It was clear that Morata leading the line wasn’t working today. He was pushed around by the Watford defense, and he wasn’t given a lot of space. An unlikely hero had to emerge to save the day for Chelsea.

Conte has made the switch to Hazard up top before, showing a bit of distrust in Batshuayi. On Saturday, he brought in the Belgian striker and changed the game plan around him.

Chelsea weren’t able to feed Morata with how close the Watford defenders were playing him, so Batshuayi was used to fight fire with fire. He used his strength to battle with defenders and get into advantageous positions as Chelsea decided to put in cross after cross into the box. He scored a goal, and pulled in extra coverage from defenders to allow Azpilicueta to score the winner. He also added a goal in the 95th minute, refusing to be dragged down by Christian Kabasele.

Kudos to Conte for recognizing what needed to change, and for trusting Batshuayi to use his skills and strengths to change the outcome of the match.

Things aren’t perfect, but Chelsea are not in a crisis

The only thing I’m concerned about is the number of injuries Chelsea players are facing. It’s not helping that we’re playing in a packed schedule when compared to last year, but it’s no excuse for the results the club has achieved.

That being said, Chelsea are not freefalling like other years. This was always going to be one of the toughest seasons with the Manchester clubs playing at such a high level.

Chelsea should have never lost to Crystal Palace, but we have to have some faith. This game showed that Chelsea are able to escape from the jaws of defeat.

While I am critical of the team’s play as of late, I think it is wrong to say it is the end of the season. Don’t give up hope.