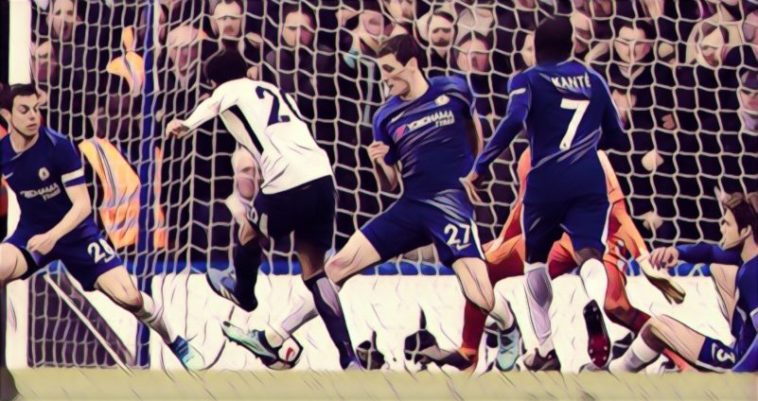 Dele Alli’s brace broke a 28-year-old curse as Tottenham pummel Chelsea in a 3-1 victory at Stamford Bridge on Sunday.

Spurs had not won away to Chelsea since February 1990. The North London club trailed after an Alvaro Morata goal in the 30th minute. The curse looked to stand until Tottenham scored three unanswered goals to put the game out of reach.

Christian Eriksen put any Chelsea momentum to a halt with a long-range goal at the end of the first-half. Tottenham came out firing on all cylinders to finish the game with sound defence holding off any attempted comeback by the Blues.

Tottenham sit comfortably in fourth place with a Champions League spot, and Chelsea are behind them in fifth. The eight-point gap will be extremely difficult to close with only seven matches left in the Premier League season.

Harry Kane came on as a substitute in the 73rd minute for Heung-Min Son. It was the English striker’s first appearance after an ankle injury that left his health in doubt for the World Cup in the summer.

Here are five things we learned from Tottenham’s crucial win over Chelsea.

Mauricio Pochettino ordered his side to press high, and it caused problems for Willy Caballero and his defence in front of him.

Chelsea’s midfield were out numbered throughout the match. N’Golo Kante and Cesc Fabregas were constantly surrounded by white shirts. The forwards continued the pressure when the ball would go back to the defence. Caballero had at least two passes nearly intercepted.

Last year, Chelsea fans joked about how Tottenham’s only recent accomplishment was that they put pressure on the table before the Blues won the Premier League.

Neither of these teams will be crowned champions this year, but pressure from Spurs won them the game, and it probably took their rivals out of Champions League qualification. Tottenham, at least this season, will get the last laugh.

The home team scored their goal with some accurate passing to find space on the wing. Tottenham’s pressing left a lot of room for Victor Moses to attack.

Antonio Rudiger drove up the pitch from the left to draw focus to himself before hitting a long pass to Moses. The switch in play gave a lot of space for the right-back to set up a cross that went over the hands of a diving Hugo Lloris and the head of Davinson Sanchez.

Morata’s positioning allowed the header to easily go into the back of the net, but Rudiger and Moses were instrumental in setting up the goal. Rudiger continued to switch the play throughout the match, but no other goals came out of it.

Alli made life difficult for the home sides defenders with his perfectly timed runs that left his opponents scrambling.

Chelsea forwards were content with letting Tottenham pass from the back. Eric Dier hit a long ball to Alli who squeezed in between Cesar Azpilicueta and Andreas Christensen. The second goal was crucial in building momentum to win the match in the end.

The Blues were on the back foot after Alli’s first goal, and the English midfielder continued to be a nuisance in front of goal. Chelsea were unable to clear the ball, and Alli’s presence in the box was rewarded with a second strike to kill any hopes of a Chelsea win.

Alli expertly attacked Chelsea’s weakness by getting in behind the defence and forcing them to chase. Antonio Conte’s side is heavily reliant on structure, and Alli made sure to break it apart for the win.

One would think that after letting in three unanswered goals, the manager would make a change or adjustment.

The last Tottenham goal was scored in the 66th minute, but Conte didn’t make his first substitution until the 81st minute when he took off Moses for Olivier Giroud. There were no noticeable adjustments in strategy even though the chances of securing a win were drastically changed.

Anyone watching this match could see that Chelsea needed something different to come back in the match. Making that change 20 minutes late and with only 10 minutes to go is a questionable choice. The first substitution was too late as Spurs had already set up to hold on for the win.

Chelsea get what they deserve

In the pre-match press conference, Conte blamed the lack of experience in his team for their current spot in the table.

“We are having the season that we are deserving,” Conte said, courtesy of The Guardian. “When you lose important players with great experience and charisma and players used to winning, you lose a lot.”

The only player he lost against his will was Nemanja Matic. Conte was the one who got rid of two-time Premier League winning striker Diego Costa. The feud between Conte and Costa sparked drama to start this season.

The last time a season started with controversy was when former team doctor Eva Carneiro left the Blues after an incident with Jose Mourinho in 2015. The now-Manchester United manager was sacked after a terrible start to the season following the drama.

Conte dug himself into a hole to start the season, and he’s not able to get out of it. He can shift blame to whoever he wants, but his decisions on and off the pitch are what led to this. He is getting the season he deserves.