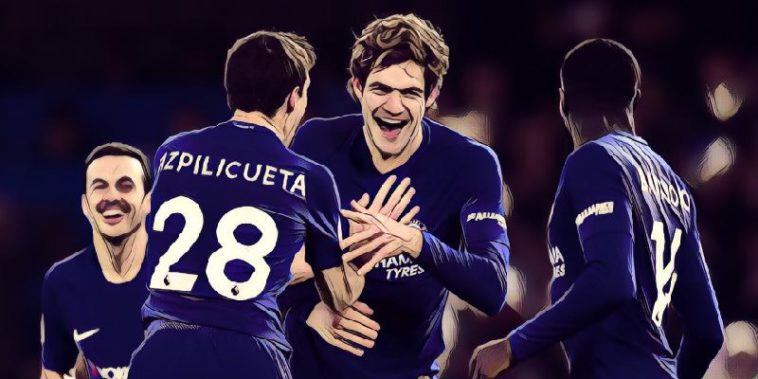 Marcos Alonso’s free kick in added time of the first half caught Southampton off guard, and Chelsea coasted the rest of the way to a 1-0 win at Stamford Bridge on Saturday.

Possession was near equal, but the Blues unleashed an onslaught of shots on the visitors, refusing to let off the gas. Fraser Forster kept the score close, but it was not enough to keep the Saints from dropping points.

Here are five things we learned from Chelsea’s win over Southampton.

When Alonso and Willian loom over a free kick, you won’t know where the shot will come from, but it will likely end with the net bulging from a goal.

Chelsea earned a free kick at the end of the first half, and it was in a spot that’s perfect for both players. Southampton took their time to set up to defend the set piece with a carefully-placed wall.

Alonso started to complain to the referee about the wall moving past the foam-spray line while Willian looked ready to curl the ball past Forster. Suddenly, Alonso stepped up and took his shot, swerving the ball around the wall. Forster was caught flat on his feet preparing to stop Willian’s decoy, and Chelsea went into halftime with a lead and momentum.

The threat of Willian and Alonso’s set-piece technique combined for a wonderful goal, and Chelsea finished the match with three more points to add to the table as they try to catch up to the Manchester clubs.

The Saints shut down most of Chelsea going forward, with the lone goal coming from a set piece.

Southampton started the match by pressing Thibaut Courtois and the rest of the Chelsea backline. This forced the Blues to make long passes over the midfield under pressure. Without a target man, possession was lost more often than not.

This type of pressure is hard to maintain, even at the highest of fitness levels. Southampton eventually switched to defending deep, allowing Chelsea more chances to score later in the match. Big saves from Forster kept the lead to a single goal.

With little space for Hazard, Willian, and Pedro to work with, fans were calling for Morata to be introduced in the second half. The inclusion of Cesc Fàbregas in the 68th minute gave Chelsea a spark of creativity. Perhaps the goal deficit would have been bigger had those two started the match instead of coming off the bench.

False-9 has become a buzzword for smaller striker

For the times when Morata and Michy Batshuayi have not started, commentators label Eden Hazard as a “false-9” flanked by Willian and Pedro. Made famous by Lionel Messi during Pep Guardiola’s Barcelona days, it has now become a buzzword that’s used too frequently to describe a striker of a smaller stature. Hazard does not play the role, even though my television is trying to make me believe he does.

False-9s play primarily as strikers who are expected to drop back into the midfield to create space for everyone else around him. It didn’t matter if Messi received the ball or not. His presence alone would pull strings like a puppeteer with defenders scrambling to cover him, giving others pockets of space to exploit.

True strikers drop back nowadays, it’s become commonplace among clubs worldwide. However, most of them drop back to find pockets of space for themselves to receive the ball. Otherwise, they usually stay the furthest up the pitch. These players are not false-9s, it’s just an evolution of the forward role.

Hazard is considered to be playing the false-9, possibly because of his past as a winger and attacking midfielder, or perhaps his similar build to the Barcelona superstar. Despite this, the Belgian drops back solely to be in a better position to receive the ball. He’s playing out of his skin, and he is the focal point of the team, but he is not a false-9. Commentators need to stop misusing the term.

After wasting time to take a corner kick in the final minutes of the match, Alonso was issued a yellow card. He will be suspended for the Carabao Cup quarter-final against Bournemouth on Wednesday.

Surely, he should have known that he was in danger of suspension after accumulating too many yellow cards to start the season. It may have been tactical to miss a domestic cup match rather than one in the Premier League.

He will be available once again next Saturday when Chelsea visit Everton and upcoming Premier League matches against Brighton, Stoke, and Arsenal, it was probably better to get this suspension out of the way. However, Chelsea do not have depth in the left wingback position, and they will probably have to start Davide Zappacosta out of position again in an elimination match.

Southampton dropped to 12th place after three losses and two draws in the last five matches, and they are only four points above the relegation zone.

Usually a mid-table club or higher, the Saints are suffering their worst start since they were promoted to the Premier League in the 2012–13 season.

Gone are the days of well-performing lineups under Mauricio Pochettino and Ronald Koeman. Southampton this season have managed to keep their star players, unlike past years when they sold Luke Shaw, Morgan Schneiderlin, and Sadio Mané. The results are unexpected, and everyone is left scratching their heads at what went wrong.

There is still more than half the season to go, and Southampton have ample time to turn things around. Hopefully they do, or else players might try to force transfers elsewhere, and the Saints will have to start from square one.