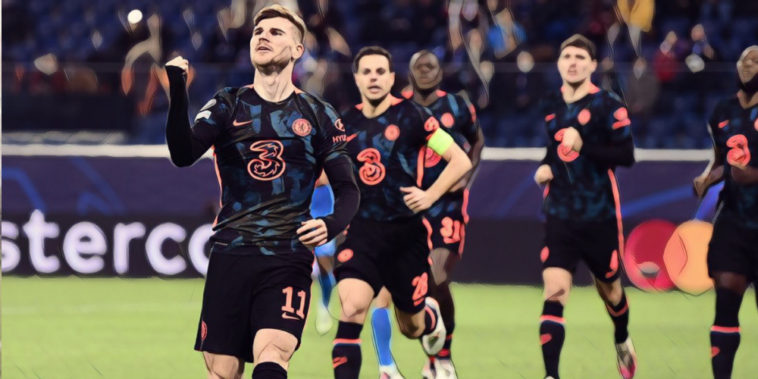 Following the final round of Champions League group stage action, we pick out some of the heroes and villains from the best and worst of the midweek fixtures.

Whilst each of the Premier League clubs were already guaranteed their place in the next round, there was plenty of drama elsewhere as the likes of Benfica, Lille, Red Bull Salzburg and Atletico Madrid all confirmed their positions in the last 16.

Liverpool, Ajax and Bayern Munich all ensured progress with 100% group stage records, though the conceding of a late equaliser saw Chelsea squander top spot to Juventus ahead of Monday’s draw.

Lille secured qualification as group winners, finishing top of arguably the competition’s most straightforward draw after beating Wolfsburg 3-1 in Germany.

Jonathan Ikone was the inspiration behind Lille’s success, the winger providing two assists and proving a menacing threat to the Wolfsburg defence with his surges forward from wide.

The 23-year-old showed blistering pace to burst from inside his own half and tee up Burak Yilmaz for the games’ opening goal, before coming close to scoring after another run through a succession of challenges.

He laid on the third for former Manchester United midfielder Angel Gomes, and the winger will be a significant loss for Lille when the Champions League resumes next year.

Ikone is set to sign for Fiorentina in a €15m deal in January, a fee that looks like a bargain on the evidence of his latest European showing.

Barcelona will feature in the Europa League for the first time since the 2003/04 season next year, a humbling 3-0 defeat at Bayern Munich condemning the Catalans to a third-place finish in Group E.

Xavi’s side were well beaten as the Bundesliga champions secured a comfortable win at the Allianz Arena, a fixture which demonstrated the increasing chasm between Europe’s elite and the current Barcelona side.

Marc-Andre ter Stegen continued his underwhelming performances with another error-prone showing, finding himself underneath Thomas Muller’s header for the game’s opening goal, before misjudging the flight of Leroy Sane’s strike for the crucial second goal.

It will be Thursday night football for the five-time European champions when continental competition resumes in 2022.

Liverpool have often been accused of lacking the squad depth of their Premier League rivals, but Jurgen Klopp’s second-string showed their quality with a 2-1 win at Serie A leaders AC Milan in midweek.

It was a pleasing performance for the Reds who saw several fringe names impress, with summer signing Ibrahima Konate a stand-out in central defence.

Alex Oxlade-Chamberlain also continued his recent renaissance with another impressive outing in midfield, providing Liverpool with drive and dynamism at the San Siro.

The latest in a string of top-class performances. The Ox is in a good place. pic.twitter.com/uBo0ZKes7v

The 28-year-old was purposeful in his passing and off-the-ball movement, linking well with Mohamed Salah, and it was Oxlade-Chamberlain’s strike that led to the Egyptian’s opening goal.

Thiago, Jordan Henderson and Fabinho have emerged as Klopp’s first choice midfield trio at present, but Oxlade-Chamberlain’s latest showing was a reminder of the option he can provide to this side.

“Unnecessary’ was how Pep Guardiola described Kyle Walker’s red-mist against RB Leipzig, the Manchester City full-back sent off for a wild kick at Andre Silva in the closing stages of the club’s defeat at the Red Bull Arena.

With City’s place in the last 16 as group winners already assured, it was a moment of madness from the England international who allowed frustrations to boil over in Germany.

Walker will certainly miss the first leg of City’s last-16 tie and there is potential for his suspension to be extended to three games should UEFA’s disciplinary panel view the incident as violent conduct.

What is he thinking here!? 🤯#UCL pic.twitter.com/pXghfR8VOf

It would come as little surprise to see the governing body take that stance, following an incident that would not have looked out of place in Sunday League. A truly brainless moment from Walker.

Benfica sealed their place in the last 16 after defeating Dynamo Kyiv in Lisbon, that result – coupled with Barcelona’s defeat at Bayern Munich – seeing the Portuguese side leapfrog the former and progress to the knockout stages.

Jorge Jesus’ side rode their luck early on as Viktor Tsyhankov missed a gaping open goal for the visitors, but Benfica’s pressure eventually told with a familiar face opening the scoring.

Roman Yaremchuk came through the ranks at Dynamo Kyiv, spending time with Genk before a move to Benfica last summer after a series of impressive performances for Ukraine at Euro 2020.

The 26-year-old chose the perfect time to score his first Champions League goal, opening the scoring against his former side to set Benfica on their way to a crucial victory at the The Estádio da Luz.

Porto were unable to join Benfica and Sporting Lisbon in making it a Portuguese trio in the next stage, wasting a golden chance to progress after losing at home to Atletico Madrid.

Sérgio Conceição’s had plenty of possession but failed to make their opportunities count, whilst they were twice exposed on the break as Atletico scored twice late on.

Chancel Mbema endured a difficult evening at the heart of the defence, including gift-wrapping Atleti’s third goal to Rodrigo De Paul after finding himself under pressure from the Argentine midfielder. The 27-year-old also failed to win a single tackle and won just one aerial duel.

Chelsea surrendered top spot in Group H after conceding a costly late equaliser at Zenit St Petersburg, with Thomas Tuchel’s rotated side failing to find the win needed to progress as group winners.

Whilst the west Londoner’s defensive fragility will have concerned Tuchel, the head coach will no doubt have been encouraged by the performance of compatriot Timo Werner in attack.

Werner has not always possessed the clinical touch to match his commendable industry, but he proved the difference in the final third for Chelsea with two goals and an assist.

Timo Werner has never lost a Champions League game as a Chelsea player:

His first from close range saw him net the Blues fastest ever Champions League goal after just 90 seconds, before a burst of speed saw him break forward to unselfishly tee up Romelu Lukaku.

Werner netted his second and Chelsea’s third after some fine footwork inside the box, a pleasing performance from a player whose past displays have been impacted by a loss of confidence.

Inter Milan were well beaten at Real Madrid in a fixture to decide which side topped Group D, the evening proving one to forget for Nicolo Barella.

The midfielder missed a good chance to get himself on the scoresheet in the second half, before earning his marching order following a confrontation with Eder Militao.

VAR deemed Barella’s petulant swing of the arm at the Brazilian a red card offence, with the Euro 2020 winner now set to miss the first leg of Inter’s last-16 tie.