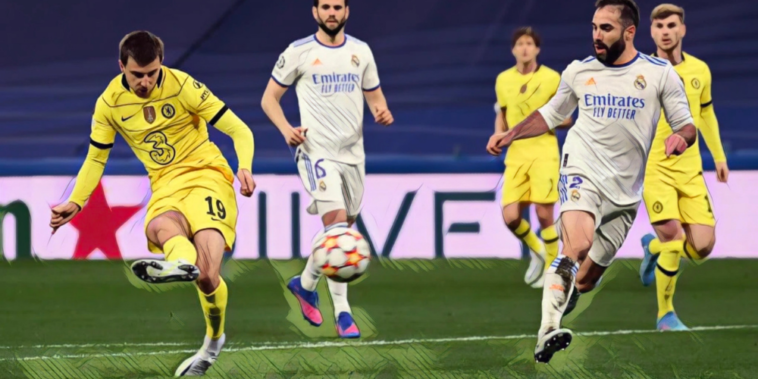 Our Champions League awards honour the best – and worst – of the quarter-final second leg action.

How anyone on the board at UEFA can look a the Champions League and think this spectacle needs changing is beyond us, with the quarter-final ties serving up some enthralling viewing.

Liverpool shared six goals with Benfica at Anfield and Villarreal left it late to stun Bayern, but the best viewing was found in Madrid as Real Madrid went toe-to-toe with Chelsea in a classic.

Chelsea were two goals down on aggregate but roared back to turnaround the tie at the Bernabeu, Mason Mount opening the scoring with a fine effort before Antonio Rudiger’s header levelled the scores.

Timo Werner looked to have won it for Chelsea, only for Rodrygo to force extra-time and Karim Benzema to break West London hearts in the added period.

Both sets of players crumpled to the floor on the full-time whistle, a scene of simultaneous relief and devastation after a gripping game of elite football.

There’s just no team that gets under the skin quite like Atletico Madrid.

From frustratingly negative tactics to delighting in the dark arts, the Spaniards are unmissable viewing in the Champions League’s knockout rounds.

Atletico are a living, breathing, incarnation of manager Diego Simeone rolled into a football team and for the last decade have revelled in causing chaos and unsettling sides with sheer shithousery.

It didn’t work on this occasion as Manchester City kept their cool in the Wanda Metropolitano, but Atletico, unsurprisingly, refused to bow out quietly and a mass kick-off was perhaps the perfect symbolisation of Simeone’s side.

It all kicked off at the Wanda Metropolitano! 😳

Felipe lashed out at Phil Foden and was eventually sent off, while Stefan Savić continued to lose the plot!

From Felipe’s red mist to Stefan Savic’s pulling of Jack Grealish’s hair, the full repertoire of nastiness was on show from the Spaniards.

Like it or loathe it, it’s true theatre on the Champions League stage whenever Atletico get aggy.

Chelsea might have exited the competition, but the holders can take pride in their attempt to overturn a dreadful first leg performance at Real Madrid.

Thomas Tuchel’s side were 3-0 up in the Bernabeu and on course to reach the last four before a late Spanish setback, with Mason Mount having been the driving force of their challenge.

Mount’s best performances and Chelsea’s finest results tend to align and the 23-year-old has evolved into the heartbeat of this side, his infectious energy and creative quality leading the West Londoners forward.

20/20 – Mason Mount (20 goals & 21 assists) is one of just two Englishmen to both score 20+ goals and provide 20+ assists for a Premier League side in all competitions since the start of last season alongside Harry Kane. Dreaming. pic.twitter.com/U0GnhTB3L1

The England international opened the scoring with a superb finish, before turning provider for Antonio Rudiger to head home Chelsea’s second of the evening.

His interpretation of space and intelligent movement had Casemiro lost on occasion and the Brazilian found himself being berated by teammates for failing to get a grip on the Cobham graduate.

Performances of this stature are a reminder of Mount’s qualities against elite opponents and he will have a central role in England’s hopes of success in Qatar later this year.

Occasionally a pass can outshine a goal and Real Madrid’s first against Chelsea was one such instance.

It should come as little surprise to see Luka Modric conjuring up moments of magic under the bright lights, but even against the standards set by the Croatian this assist was something special.

Inch-perfect from the outside of his boot and an assist that ensured Real remain alive and kicking in this season’s Champions League.

Ibrahima Konate proved the unexpected kick-start of Liverpool’s quarter-final win over Benfica, opening the scoring in both legs against the Portuguese side.

Having scored his first Liverpool goal in Lisbon last week, the centre-back netted the first in the 3-3 second leg draw with his first Anfield goal.

He became just the fourth Liverpool player to score in both legs of a Champions League quarter-final and almost certainly the most unlikely.

Villarreal upset the odds once again to dump out Bayern Munich, a late equaliser in Germany booking the Spanish side a place in the semi-finals.

Dani Parejo revealed post-match that the La Liga team had been fuelled by a perceived show of disrespect from Bayern, using a wonderful – if a little grim – figure of speech to ridicule the beaten Bavarians.

Liverpool have been warned against underestimating the Yellow Submarine in the semi-finals.

Felipe’s only surprise with his red card in Atletico Madrid’s exit to Manchester City should have been that it didn’t come earlier, with the defender taking ‘leaving one on him’ to a whole new level.

The centre-back almost decapitated Phil Foden early on and made a number of cynical challenges, eventually being sent off as the red mist descended and he lost his cool late on.

Such was his complete head loss, he had to be dragged from the pitch by teammates and then refused to head down the tunnel, lingering around until another chance to take on City at full-time.

In a team full of pantomime villains it was the Brazilian who took centre stage.