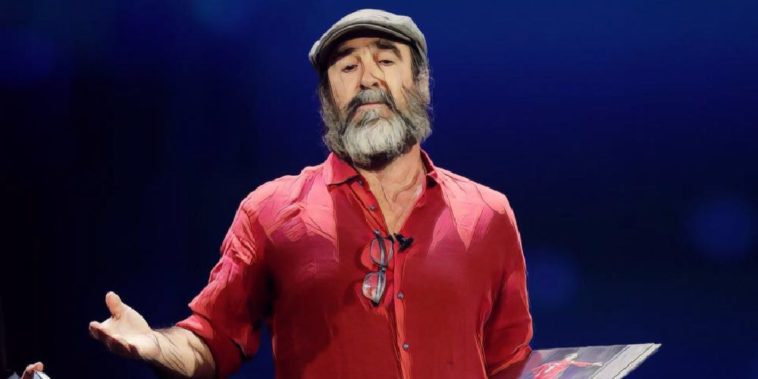 Eric Cantona has delivered a bewildering and baffling speech after being awarded the UEFA President’s award at this afternoons Champions League draw, in a way that only the great man could.

Cantona has never been one for sticking to convention, and has always had a particular knack of expressing himself in purely enigmatic style. Remember the Seagulls and the trawler speech?

Well today, after being honoured with the Uefa President’s award for his commitment to helping improve the lives of others, the former Manchester United forward once again embarked on another of his trademark verbal ramblings, with this bizarre answer to “what is going through your mind right now?”:

“As flies to wanton boys are we to the gods. They kill us for their sport.”

He added: “Soon the science will be able to slow down the ageing of the cells, to the state. Soon we will become eternal.

“Only accidents, crimes, wars, will still kill us.

“Unfortunately, crimes, wars, will multiply. I love football. Thank you.”

If, like me, you thought that actually watching the video of the speech could help to make a bit of sense to all that, then maybe this video is for you:

Eric Cantona has just won the 2019 UEFA President’s Award and accepted it with a speech that rivals the seagulls following the trawler. Thank you, Eric.
pic.twitter.com/pDqNiKaT5o

Nope, thought not. Not even Lionel Messi and Cristiano Ronaldo looked like they could work out what was going on either.

Read: From Cantona to Sanchez – Ranking all of Manchester United’s number 7’s

See also: Eric Cantona and how he made us feel