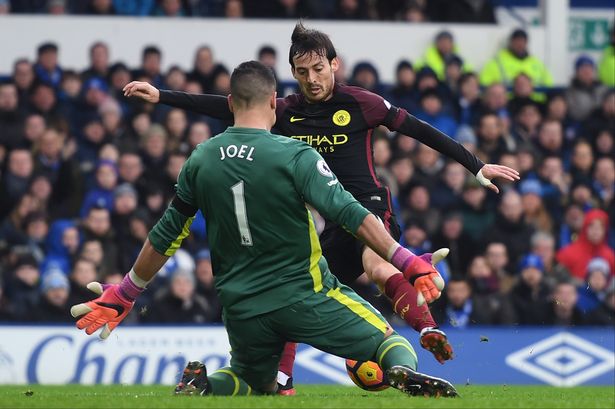 With Everton still searching for the winning formula between the sticks, we look at Joel Robles’ credential she to be the clubs long term number one.

Not since Nigel Martyn have Everton had a top quality undisputed first choice goalkeeper. There was absolutely zero chance of his absence from the starting 11 unless there was an injury or suspension which of course don’t happen often for keepers.

However since then the first choice goalkeeper spot has been a point of controversy with numerous keepers coming and going, none being able to replicate the quality left by Martyn.

We see another keeper set to challenge this in Joel Robles. Robles who was brought in as second choice during Roberto Martinez’ first season at the club was very clearly a backup to then first choice Tim Howard.

Robles has had a somewhat strange Everton career thus far in terms of form. In his first season the few cameos he made were largely unimpressive with fans, and manager alike, not wanting him back in the team. However it was his second season where he began to turn some heads, although not all the right ones.

Waiting for his chance

First choice Tim Howard had rapidly declined in form and had been universally seen as not good enough anymore by the Everton fans. It was in the one off cup appearances, of which there was not many due to Everton’s poor form, that Joel really started showing his potential quality if given the chance.

This chance never came that season though. Everton went on to finish 11th as a result of horrendous defending and keeping faith in a goalkeeper who was quite evidently past it, despite many claiming that he never had “it” in the first place.

Shockingly in Martinez’ final season he once again chose to keep faith in Howard leaving Joel to languish on the bench despite having shown the potential of something better. It was this stubbornness that eventually would cost Martinez his job but also his determination to stick with Howard for the first half of the season meant that once Joel got his chance the likelihood of salvaging anything from the season was well gone.

Despite this being one of the worst times for the Everton team in the past 15 years it was great for Joel’s career. He began to show his ability and yes while it was not world class it was certainly an improvement.

Fast forward to this season under Ronald Koeman and Joel once again started the season on the bench. Many fans, myself included, would’ve liked Joel to leave in search of first team football to further his career as at his age he needs to be playing regularly.

Once Maarten Stekelenburg was brought in it was generally thought as that he would be third choice behind Joel and a potential new keeper however this new keeper never materialized with rumors of Joe Hart being very close to signing with Koeman pulling the plug at the last minute. This left Stekelenburg starting as first choice to the surprise of fans but also once again left Joel frustrated on the bench.

It was all going relatively well with Stekelenburg but like Tim Howard before him you could always see there was a mistake in him. Consistency was also a key aspect that he seemed to lack from his game. For every game like the one he had against Manchester City, saving two penalties, he’d have a shocker against Burnley. At the top level it’s not acceptable to have a keeper you can’t rely on every week.

Once Stekelenburg got injured against Liverpool and had to be replaced by Joel it seems that his Premier League career may be over. Since Joel has come in as first choice he’s gotten some stability which was desperately needed especially when Koeman at the time was still trying to figure out his best team. As a result of the faith Koeman has entrusted Joel with he has come up with some massive saves and great performances in his time as first choice.

In 2017 Everton are unbeaten in the league largely due to the confidence Joel gives the team as the defenders know they’ve a really good keeper behind them.

So the question is if he’s good enough to continue?

In my mind the answer would be to give him next season as first choice and bring someone like Jordan Pickford in to learn from both him and Stekelenburg.

In goalkeeping terms Joel is still young and should he show he is good enough, it’s not ridiculous to suggest that he could be first choice for the next 10 years. The only reason I would gladly see Joel not as first choice is if the club made a statement and brought in a truly world class keeper to replace him. However, I don’t see that happening in the summer.

Realistically who is there at a good enough quality that would come and replace him? The top class keepers wouldn’t leave their current clubs, especially not for Everton, and the level below aren’t that much of a significant improvement on what Joel already has.

What does the future hold?

It’s clear Joel has a strong fondness for the club and would love to stay and that’s a quality that doesn’t come around in many players in the modern game. You can see how much it means to him when Everton score and win, often running the length of the pitch to join the celebrations. In my opinion if he continues to show what he does there’s no doubt that he should remain first choice.

Top keepers like David De Gea have taken time to adjust to the Premier League, and while Joel is not near his quality, their stories are comparable. Also with replacing him comes the risk of a disaster at the back with examples even this season of Claudio Bravo and Loris Karius not adjusting to the league after coming to their respective clubs expecting to be first choice indefinitely.

Whatever comes of the situation the outcome will benefit Everton. Either Joel will become a really good top 6 keeper or Everton will replace him with someone better and Joel will likely leave to find success elsewhere which I’m sure no one would begrudge him for and would in fact wish him all the best.