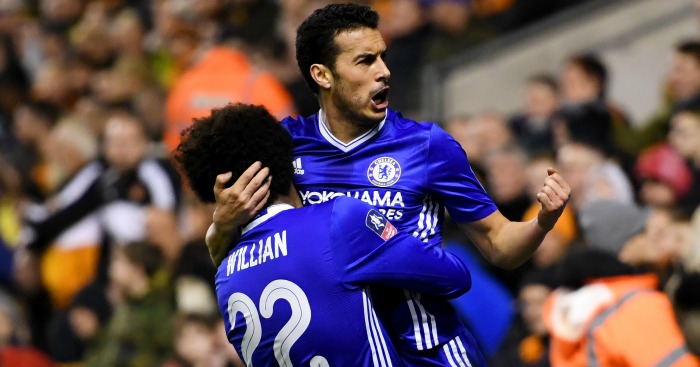 Wolverhampton Wanderers were unable to beat a third Premier League team in the FA Cup this season as Chelsea came out 2-0 winners at Molineux.

The goals came from two of Chelsea’s Spanish stars, Pedro and Diego Costa. The match was quite even until just after the hour mark where a cross from Willian was met at the back post by Pedro. A few minutes from time, Diego Costa wrapped it up to send Chelsea through to the sixth round.

From the team that lost midweek against fellow relegation strugglers, Wigan Athletic, Wolves made five changes. Weimann, Price and Saville came in for Ronan, Evans and Enobakhare in the front six while Hause and Coady came in at the back for Marshall and Stearman to complete their back four. The man who found the net at Anfield in the last round, Richard Stearmen, had to settle for a place on the bench.

Chelsea changed their entire defence and midfield except for Victor Moses who retained his place following the draw at Burnley last weekend. Pedro moved to the wing-back role he filled in the previous two rounds, as Willian joined the front three. Courtois, Cahill, David Luiz, Azpilicueta, Kante, Matic and Alonso dropped out for the aforementioned Willian, Begovic, Ake, Terry, Zouma, Fabregas and Chalobah. Eden Hazard and Diego Costa completed a very strong line-up for the Blues.

Neither side got a firm grip on the game early on, but the first real chance of the game fell to former Chelsea man, George Saville. A cross came in from the left and after Kurt Zouma failed the clear, the ball kindly sat up for Saville. His shot was very powerful but unfortunately for him, it cannoned off the post. Chelsea keeper Asmir Begovic was clearly beaten and had that have been on-target, Wolverhampton would’ve been leading against the league-leaders.

Chelsea’s first good chance fell the way of Willian. After a brilliant through ball from Fabregas, Willian appeared to be one-on-one with the keeper but his touch took him slightly wide. By the time he managed to get his shot away, the angles were against him and it was quite easily saved by Wolves goalkeeper, Carl Ikeme.

The rest of the half was fairly even without either goalkeeper being troubled greatly.

The first real chance of the second half fell to Diego Costa. After a clever run and a well-timed ball from Willian, he was one-on-one with the last defender. After shrugging past Wolves defender, Danny Batth, he had only the keeper to beat from a tough angle. His powerful shot didn’t even trouble the keeper as it hit the side-netting.

They didn’t have to wait long after that chance to break the deadlock as Pedro found the opener with twenty-five minutes left. A defence splitting pass from Fabregas found Diego Costa. With little support, he pulled it back to Hazard at the edge of the box. From there, the Belgian played a short pass to Willian, whose first time cross to the back post found the head of Pedro who’d made a brilliant run from wing-back. His header found the bottom left corner of the Wolves net and put Chelsea 1-0 up.

A chance to all but seal it fell to Cesc Fabregas five minutes from time. Diego Costa intelligently put a header in Eden Hazard’s path just inside the Chelsea half, but he wasn’t quick enough to get a clear sight on goal. When Hazard turned, he played in Fabregas but his shot from fifteen yards could only achieve a corner for the Blues after it was deflected wide.

The decisive goal came just a few minutes later for Chelsea. Although he had been below par throughout the day, Diego Costa was in the right place, at the right time to make it 2-0 to Chelsea. After a misplaced Fabregas pass, the ball deflected off both Matt Doherty and N’Golo Kante before finding its way to Costa who tucked away his first non-Premier League goal of the season.

That’s the way the game would finish, with Chelsea securing a spot in the sixth round of the FA Cup for the second consecutive year. Wolves were unable to beat a third Premier League team in their brilliant cup run so far after they’d already beaten Liverpool and Stoke away from home. In their next match, Chelsea host Swansea at the Bridge while Wolves play at home to Birmingham City in a West Midlands derby.