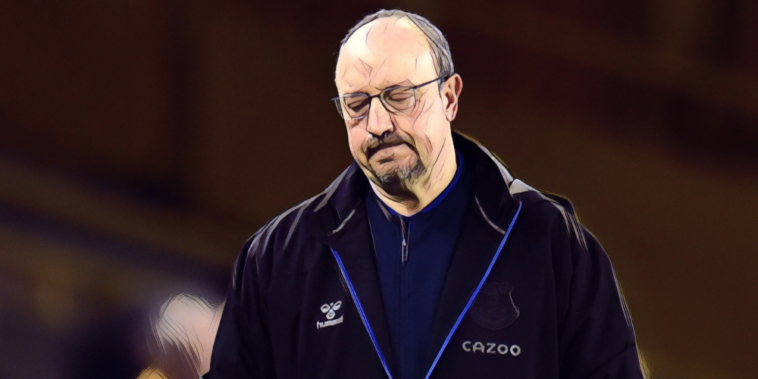 Rafael Benitez has confirmed that Dominic Calvert-Lewin is fit to return for Everton this weekend, but revealed that he has just nine senior outfield players available for the Boxing Day clash at Burnley.

Calvert-Lewin has not featured since August due to a series of injury issues, having started the Premier League season in impressive form with three goals from three appearances.

The 24-year-old’s return to the side will be a welcome boost for Everton and Benitez, who spoke on his surprise that the fixture has not been postponed amid the Toffees’ mounting issues.

Liverpool’s game against Leeds and Wolves’ game against Watford have already been postponed, though Everton have had their request for a postponement rejected.

The Spaniard confirmed that Everton have just nine outfield players available for the trip to Turf Moor and spoke on his concerns with rushing Calvert-Lewin back into the side.

“We have six injuries and five players with COVID,” Benitez said at his pre-match press conference. “I am really surprised we are playing this game.

“We have followed all the rules, we have done lateral flows every day, we do the PCRs and have we worn the masks. We have players in three different dressing rooms [to reduce the risk of transmission].

“But we cannot control if you go to a game, if a player has the virus [and passes it on]. After the Chelsea game, we found we have five positives.

“We have nine outfield players and three keepers. And then we have to bring five new young players into the team, who are not even 21 years old.

“We have to play players who are not fit, and we are exposing them. Dominic [Calvert-Lewin] has been out for two months and maybe has to play for 90 minutes.

“We have players who have knocks. It is a massive risk.

“My main focus now is to find 11 players who can play against Burnley. It will not be easy.”

Read Also – Where did it all go wrong for sorry Everton?