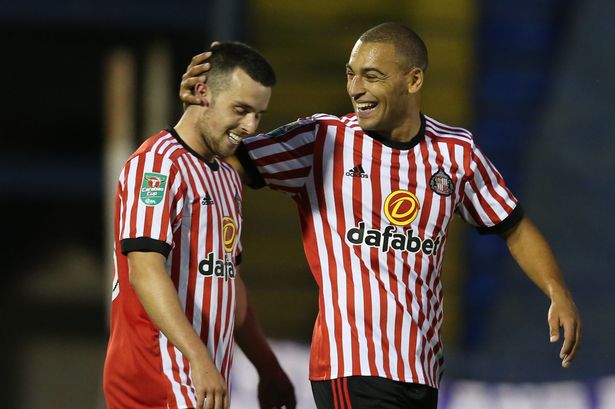 Sunderland travelled to Gigg Lane for the second time in a month, after coming from 2-0 down to beat the Shakers 3-2 in July for Simon Grayson’s first game. However this trip to Greater Manchester would be a competitive fixture in the League Cup.

Bury manager Lee Clark described his former club as the biggest outside the Premier League before this game, although he got an expected hostile reception from the 1000 travelling fans.

Grayson made a few changes to the team that were held by Derby the week before including a start for winger Wahbi Khazri.

Sunderland started on the front foot with Lewis Grabban hitting the woodwork with a header off a Galloway cross. Winger Aiden McGeady then tested former Sunderland goalie Joe Murphy, who never actually played a competitive game for the Black Cats, a shot he dealt with reasonably well. Shakers captain Stephen Dawson then had to go off injured after slipping on the wet turf following a dual with countryman Darron Gibson. Not long after that Sunderland skipper John O’Shea felt he should’ve had a penalty as he was having his shirt ragged on a corner.

Not long into the second half, Khazri capitalised on a heavy touch by the Bury centre half, rounded goalkeeper Murphy but slipped at the vital moment and failed to break the deadlock.

The deadlock was eventually broken by Prudhoe born winger George Honeyman. Some good running from him saw him find Asoro who lost it but right back Adam Matthews recovered the ball and found Didier Ndong. He slotted the ball into Honeyman’s path who in turn clipped it over goalkeeper Murphy for his first senior goal for Sunderland, the club he’s been with since he was 10 years old.

The biggest threat from the home team was a potshot from Jermain Beckford, who has 76 career goals under current Sunderland boss Simon Grayson for a variety of clubs.

Asoro came close to doubling the Wearsider’s advantage after a good run and layoff from Honeyman only for the goalie to come rushing out and clear the ball only as far as former Bury frontman James Vaughan to fire over the bar, the Sunderland hitman started against them in the friendly in July.

So Sunderland advanced to the second round and will play Cumbrians Carlisle United at Brunton Park. Still no debut for Dutch goalie Robbin Ruiter but a clean sheet for Steele who looked improved. Simon Grayson won this competition as a player with Leicester City in 1997 but has never won it as a manager.