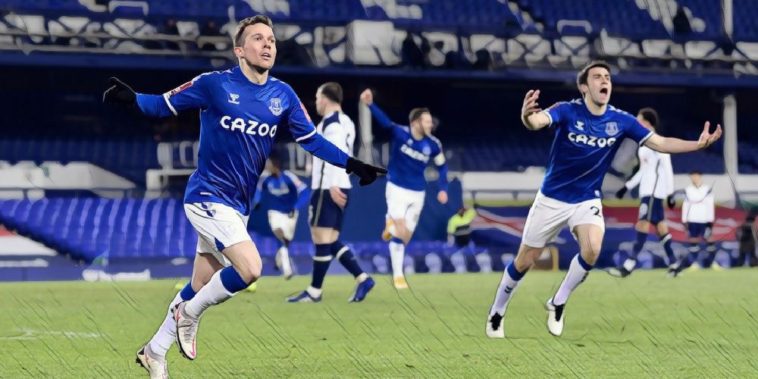 Everton edged through to the FA Cup quarter-finals with a hugely entertaining nine goal thriller against Tottenham Hotspur at Goodison Park.

Spurs got off to a rapid start, with Everton ‘keeper Robin Olsen forced into early save from Erik Lamela, before Davison Sanchez gave visitors the lead, the Colombian rising highest to nod home a header from a corner in just the third minute.

Everton steadied the ship and got themselves back on terms in the 36th minute. Abdoulaye Doucoure won the ball back high up the pitch, Gylfi Sigurdsson flicking the ball into the path of Dominic Calvert-Lewin, who thrashed a powerful volley past Hugo Lloris, though the Spurs captain really should have done better.

Two minutes later, and Carlo Ancelotti’s side had turned the game on its head, Richarlison firing home an excellent effort from the edge of the box, the Brazilian expertly finding the bottom corner.

The Blues capped an excellent seven minute spell as they went 3-1 ahead, former Spurs playmaker Gylfi Sigurdsson netting after Calvert-Lewin was clipped just inside the box by Pierre-Emile Hojbjerg, before the Iceland international sent Lloris the wrong way from the resulting spot kick.

However, Spurs pulled one back in first-half stoppage time, Erik Lamela playing a one-two through the Everton defence before lifting the ball over the Toffee’s Swedish ‘keeper.

12 minutes after the break, the scores were level once more, Davinson Sanchez the unlikely hero as he bagged his second of the evening after Olsen had saved Toby Alderweireld’s initial header from yet another corner.

The goals kept on coming, with Richarlison crashing an effort in off the post from an acute angle following a threaded ball through from Sigurdsson, before Harry Kane made it 4-4 with seven minutes to play, the England captain meeting a delightful Heung Min Son cross at the back post with a diving header.

Everton finally struck the winner seven minutes into extra time, Sigurdsson registering his third assist of the evening with a sumptuous lifted ball over the Spurs defence, with diminutive playmaker Bernard allowing the ball to bounce before firing past Lloris on the half-volley with his left to fire the Blues into the last eight.

Speaking afterwards, Everton legend and current assistant boss Duncan Ferguson was beaming with what he saw from his side, while admitting that they struggled to deal with Spurs’ threat from set-pieces.

“Fantastic game, brilliant game,” he told BT Sport. “Defences struggled, we struggled a bit in set plays and they struggled in corners. We went 1-0 down and then got back in the game. We played a lot of good football – I started to lose count of the goals.

“Couple of good goals, Dominic Calvert-Lewin got the penalty and scored one of his own, Gylfi Sigurdsson was brilliant. There were a lot of good performances on the attacking side.

“Spurs were putting in some good deliveries [from set-pieces], we couldn’t deal with them, considering we’re a big side, fair play to them they did really well.

“It was end to end, great for the fans watching at home. Great for us to go through – we showed a lot of good spirit and then Bernard pops up with the winner so it was a great game.

“It was a long night for everyone so the main thing is that we’ve come away and won it.”

Next up for Everton is a home game against Fulham in the Premier League.

See also – Laying down a marker: The biggest statement victories of the Premier League era