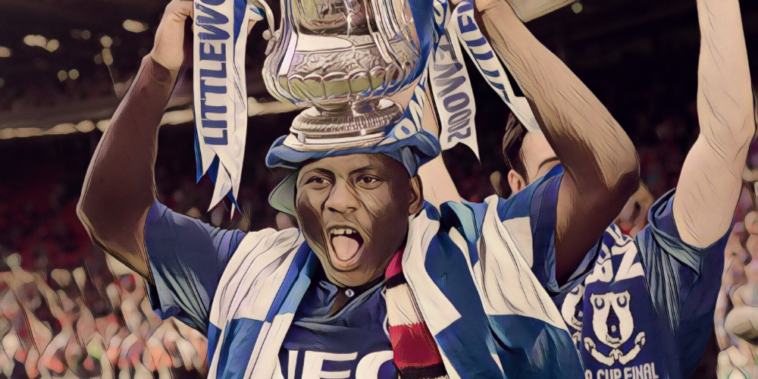 Amokachi established himself as a cult hero on Merseyside following his intervention as a substitute against Spurs in 1995, coming off the bench to score twice and seal Everton’s place in the Wembley final.

The Nigerian international’s story became the stuff of legend after Amokachi – who had largely struggled to make an impact at Everton – substituted himself into the action, introducing himself to the fold following an injury to Paul Rideout who was stretchered off.

Rideout was set to return following treatment, only to find Amokachi had taken matters into his own hands much to the confusion and fury of manager Joe Royle.

Everton and Spurs meet in the FA Cup for the first time since that memorable occasion at Elland Road this evening and Amokachi has recalled the tale of an afternoon that ensured his place in the Toffees’ folklore.

“I came to Everton with a lot of expectation and I am one of those who the Premiership hit hard,” he told The Times. “I knew I was a damned good player, going through a phase. I was waiting for the opportunity and the semi-final was that opportunity.

24 years ago today: the best substitution Joe Royle never made.

With Paul Rideout injured, Daniel Amokachi subs himself on before the #EFC boss can stop him, then scores twice vs Spurs in the FA Cup semi-final.

“I was in top shape and I thought I was going to start the semi-final because Paul Rideout was struggling injury wise, but the gaffer gave him a go and I was on the bench. In the second half Rideout got knocked down and the doctor checked him out and the gaffer said to give him five more minutes and then he was down again. When that happens, a replacement is warming up just in case, which was me.

“The second time that Rideout went down I went to Jimmy (Gabriel), the attack coach, and said the gaffer had said he should write me in (as the sub). He never expected me to come to him and lie and about something like that, so I gave the fourth official the slip of paper and he lifted my number, and I ran onto the pitch.

“If you look carefully at the footage you can see when Joe Royle comes running down the line shouting: ‘what are you guys doing?’ but I was already out there and if I came off, we would be a sub down.

“I looked back at Joe Royle, fixed my collar, and behold, I scored two goals and it could easily have been a hat-trick. It was probably one of my most memorable games with Everton.”

Amokachi’s double helped Everton secure a 4-1 victory and the Merseyside club would go on to beat Manchester United in the Wembley final, the 1995 FA Cup remaining the club’s most recent major honour.

The former forward’s self substitution paid dividends as he made an instant impact off the bench, though the Nigerian admits it could all have turned out differently had he failed to find the net.

“It probably would have been my last game at Everton,” he said. “Because when I came into the locker room and we were celebrating, the gaffer said: ‘Well done son, but never try that shit again.”

See Also: The Everton cult hero who subbed himself on in an FA Cup semi-final – and scored twice