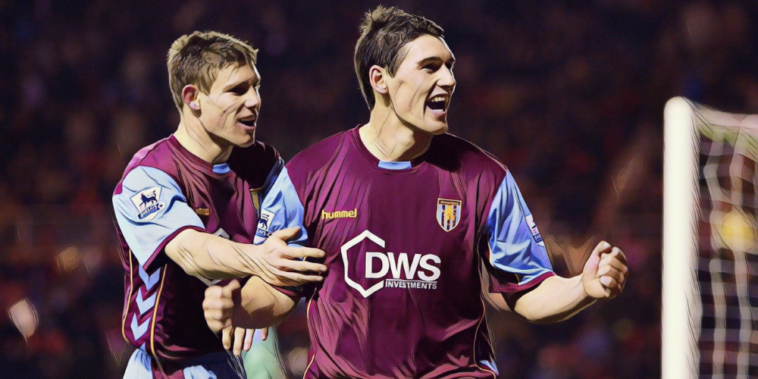 Jack Grealish is understood to be close to completing a move from Aston Villa to Manchester City, in what will represent a Premier League record transfer and English football’s first £100m player.

Grealish faces a huge decision on whether to leave his boyhood side for a better chance at silverware at the Etihad, having come through the academy ranks before being named as club captain.

There have been plenty of notable names to have adorned the colours of both teams in recent years and ahead of Grealish’s record-breaking move we look at five of the best players to play for Manchester City and Aston Villa in the Premier League era.

Peter Schmeichel’s best years undoubtedly came in the colours of Manchester United, but the man many regard as the greatest goalkeeper in Premier League history enjoyed spells with both Aston Villa and Manchester City during the latter stages of his career.

The former Denmark international signed for Sporting Lisbon after a career at Old Trafford that delivered five league titles, three FA Cup trophies and the Champions League, but returned to the Premier League to sign for Aston Villa in 2001.

The first ever #PL goal scored by a goalkeeper! 👀

Schmeichel spent just one season at Villa Park, a campaign which saw him become the first goalkeeper to score a Premier League goal after netting in a 3-2 defeat at Everton.

He later controversially signed for Manchester City and called time on his career after one season at Maine Road in which he made 31 appearances in all competitions.

A firm favourite of both sets of fans, Richard Dunne became a cult hero after signing for Manchester City from Everton at the turn of the century.

The centre-back endured an indifferent period on Merseyside before establishing himself as an integral figure at City, forming part of the side promoted to the Premier League after scoring more than a 100 goals in 2001/02.

Dunne featured regularly as the club consolidated themselves as a Premier League side over the following seasons, his consistent performances rewarded with City’s Player of the Season accolade in four consecutive campaigns between 2005 and 2008.

The former Republic of Ireland international made 352 appearances for Manchester City and scored seven goals, his no-nonsense approach appreciated by the City support.

He departed soon after the club’s billionaire takeover and enjoyed a three-season spell with Aston Villa, earning inclusion in the PFA Team of the Year after helping Villa to a sixth-place finish during his maiden season with the club.

Grealish could follow in the footsteps of another former Aston Villa captain with a move this summer, with Gareth Barry having signed for Manchester City in search of silverware in 2009.

Barry had spent more than a decade at Villa Park after signing from Brighton as a youngster, making 441 appearances for the club across all competitions.

The unassuming midfielder joined City in an £18m deal ahead of the 2009/10 season and became an integral figure to a side on the rise in English football, forming part of the team that ended the club’s 35-year wait for a major trophy with FA Cup success in 2011.

Barry claimed a Premier League winners’ medal the following season as City snatched the title in dramatic fashion on the final day, making 175 appearances in total before a four-year spell at Everton.

The former England international retired in 2020 as the Premier League’s record appearance holder, his boots hung up after 653 top-flight outings.

James Milner enjoyed two separate spells at Aston Villa during a Premier League career that has spanned almost two decades, joining the club on an initial loan deal in 2005/06, before a permanent move to the Midlands from Newcastle in 2008.

He starred as part of an exciting collection of young talent under Martin O’Neill at Villa Park, helping the club to consecutive sixth-place finishes and being named as the PFA Young Player of the Year in 2009/10.

That season proved his final campaign with Villa after completing a £26m move to Manchester City, with the deal including fellow midfielder Stephen Ireland heading in the opposite direction in part-exchange.

Milner’s time at the Etihad delivered two league titles and FA Cup success, though he often found himself on the fringes with 58 of his 147 league appearances for the club coming as a substitute.

He moved to Liverpool on a free transfer in 2015 and continues to play a useful role at Anfield, Milner currently fifth amongst the Premier League’s all-time appearance makers.

Kyle Walker has been a key part of Manchester City’s successes in recent seasons, winning three Premier League titles in just four seasons since a high-profile move from Tottenham.

Walker had spent eight years with the north London side, a period which included a loan move to Aston Villa as the young full-back developed his game during the second half of the 2010/11 campaign.

He made 15 league appearances before returning to Spurs, establishing himself as one of the best right-backs in the Premier League during his time in the capital and winning the PFA Young Player of the Year award in 2011/12.

The England international signed for City in a £50m deal during the 2017 summer transfer window, as Pep Guardiola overhauled his full-back options.

Walker’s hat-trick of Premier League titles have come in addition to four consecutive League Cups and an FA Cup winners’ medal, the move to Manchester having been vindicated following a wealth of silverware success.

The first ever #PL goal scored by a goalkeeper! 👀