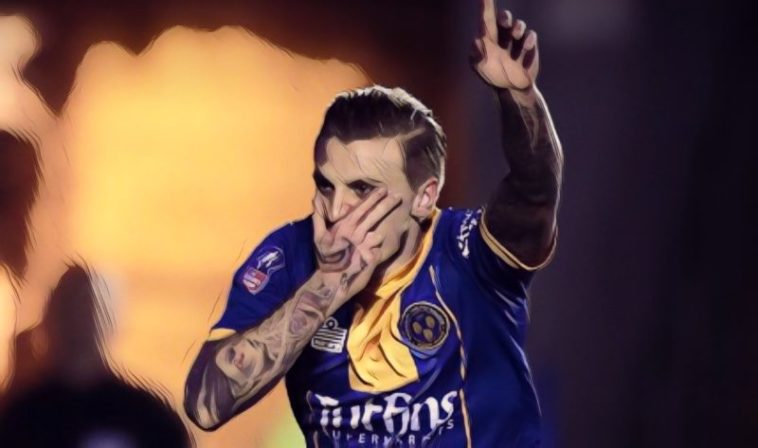 The FA Cup fourth round has provided us with some memorable moments thus far, including a shock result, a corker of a goal from an unlikely source, and a moving tribute.

And we’ve still got Arsenal versus Bournemouth on Monday night to come. Here’s the best of what we’ve seen so far:

Liverpool appeared to be cruising into the fifth round draw after Curtis Jones’ opener was followed up with a Shrewsbury Town own goal just thirty seconds into the second-half. But never, EVER discount the Magic of the Cup™ kicking in.

Sam Ricketts subbed on Jason Cummings to try and save the match, and that he did by scoring a quickfire brace. The striker scored his first from the spot, before making a mockery of Dejan Lovren for the equaliser.

Shrewsbury Town secure a dream trip to Anfield in the #EmiratesFACup thanks to an incredible second-half comeback! pic.twitter.com/yuYLO7od9E

Jurgen Klopp sent on Mo Salah to regain the lead, but, while Liverpool peppered the home side’s goal with shots, the Shrews held on for dear life to secure the League One outfit a dream replay at Anfield.

Every Liverpool defeat since the beginning of the 2018/19 season

It’s been a proper Jekyll and Hyde campaign for Manchester United this season, with good performances one week followed up with dire fare the next. They’ve beaten Chelsea, Man City and Spurs, as well as being the only team to get a result against Liverpool, but have also lost to the likes of Bournemouth, West Ham, and Burnley.

Having lost twice consecutively in the past week, Ole Gunnar Solskjaer couldn’t afford his charges slipping on the proverbial banana skin against Tranmere Rovers. Despite the awful condition of the pitch, United disposed of the League Two club with ease.

They scored six goals in all, the first time they have done so since Alex Ferguson retired, but the strike of the afternoon came from Harry Maguire. The centre-back, who hadn’t scored for the club since joining in the summer, let loose from distance in the 10th minute with a laser beam of a shot.

It’s not the worst way to open your account for a club, and he got the ball rolling for Diogo Dalot, Jesse Lingard, Anthony Martial, Mason Greenwood and even Phil Jones to follow suit. This result was hardly a season saver, but it at least gave the team a brief reprieve before they face the daunting task of Man City at the Etihad on Wednesday night.

Sometimes we forget that football is just a game and life is so much more than a 90 minute match. That sentiment came to mind when Reading striker Yakou Meïte paid tribute to his late father, who passed away last weekend, after scoring against Cardiff City. He revealed a message underneath his jersey which read, “I love you, Dad” in French.

A beautiful moment for Yakou Méïté as he dedicates his #EmiratesFACup fourth round goal to his late father ❤️ pic.twitter.com/q5QY5N5yU1

After the final whistle, Meïte took to social media, saying: “Dad. I wanted to pay you this last tribute in my own way.

“I didn’t want to be a superstar but just to make you proud, and I know that from where you are you are proud of your son. I decided to play this match because I know you would have wanted it. God allowed me to score this goal for you and I will remember it all my life. Thanks again to everyone. I love you Dad.”

Dennis Praet hits the pass of the weekend

Leicester City’s Belgian midfielder hasn’t featured too predominantly this season, making just eight starts in the Premier League, but it’s clear that Dennis Praet is in line to run the show in the centre of the park once James Maddison is inevitably sold for a ton of cash.

In the meantime, Praet will come off the bench regularly, start in the cup games and every now and again hit a defence-splitting pass such as this:

Praet’s pass looks as if it has missed the mark completely, as James Justin is hugging the sideline, yet he actually hits it into exactly the right spot for the full-back to meet the ball without breaking his stride. The young defender in turn sets up Kelechi Iheanacho for the only goal of the game.

Expect to see a lot more of Praet next season.

How will new loan signing Gedson Fernandes fit in at Spurs?

Sol Bamba makes the miss of the season

The aforementioned Reading vs Cardiff match ended in a 1-1 draw, meaning both sides have it all to do again, but a replay could have been avoided had Sol Bamba not somehow not this glorious chance wide:

Reply with your reaction to this #EmiratesFACup miss 👇

How?! Only a few yards out, the centre-back is in a position where it’s actually easier to score than to miss, but he does so anyway. For whatever reason he also decides to head the ball instead of kick it, despite the fact it’s about mid-height. He’ll be having nightmares about that one.