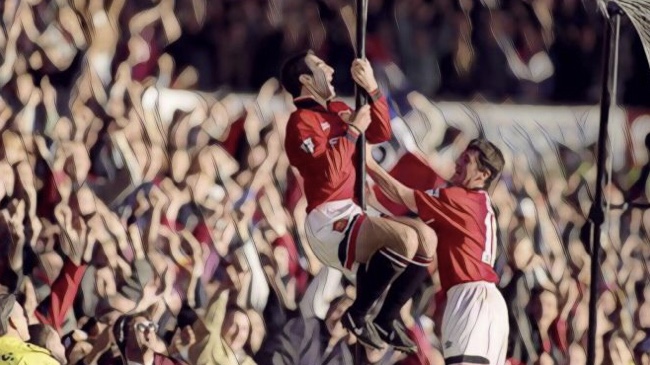 It’s not technically a derby but games between Liverpool and Manchester United are always some of the most anticipated fixtures on the Premier League calendar.

So ahead of the latest instalment this weekend, let’s look back at five of the best encounters between the two clubs.

Let’s start it off with a draw. Any game between these two clubs comes pre-loaded with drama, but the return of Eric Cantona from suspension due to his famous kung-fu-kick added to this early October meeting between Manchester United and Liverpool.

The Merseyside club found themselves with a 2-1 lead after their own talisman, Robbie Fowler, had first cancelled out Nicky Butt’s opener,  which had of course been set up by the returning Cantona. He then put his side in to the lead and it seemed as though they were going to record a very satisfying win at their rival’s home but with 20 minutes left on the clock, Ryan Giggs was brought down in the box and only one man was ever going to take it…

Deadlocked in October 1995, the two sides met again in the FA Cup final in May 1996. As ever, it was a tough, tense affair. Battles raged through the middle of the park and there were precious few chances created.

With five minutes to go David James half punched a corner clear, it landed just outside the box at the feet of Eric Cantona and the rest is history…

Perhaps Liverpool‘s finest ever performance against Manchester United. The Red Devils, and Nemanja Vidic in particular, simply could not cope with this rampaging Rafa Benitez led side.

Cristiano Ronaldo bagged the opener but goals from Fernando Torres, Stephen Gerrard, Fabio Aurelio and a stunning lob from Andrea Dossena sealed a famous win for the Merseyside club.

Neutrals might look at John O’Shea as something of a journeyman, but to Ireland and Manchester United fans, he is a hero. Nutmegging Figo sealed his place in Irish hearts forever while his stint in goal, his chip against Arsenal and most importantly his late, late winner in front of the Kop guaranteed he’ll never need to put his hand in his pocket in Manchester for the rest of his life.

We’ll end it with another draw, this one is from down at the back of the vault. United were riding high having been crowned champions for the first time in 26 years and when they eased into a 3-0 lead after just 25 minutes it seemed as though things were only getting better for the Manchester side.

Incredibly though, Liverpool clawed their way back into the game. Nigel Clough netted twice to set United’s nerves on edge before Neil ‘Razor’ Ruddock sent Anfield wild with a thumping header.