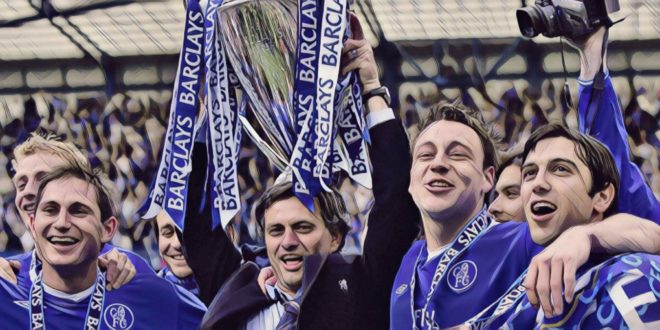 Six best ever starts to a Premier League season

Liverpool are the early leaders in this season’s Premier League title race, having enjoyed a perfect start to the new campaign with five successive wins to establish an early five-point lead at the top.

Jurgen Klopp’s European champions have been in impressive form as they bid to go one better than last season’s runners-up finish, but where does the Merseyside club’s start rank amongst the all-time best in Premier League history?

Arsenal began the season in similar fashion to Klopp’s Liverpool, continuing from their famed Invincible season the previous year to record five consecutive wins in the campaign.

Forward Jose Antonio Reyes scored in each of the club’s first five fixtures as they comfortably dispatched of Everton, Middlesbrough, Blackburn, Norwich and Fulham, before Sam Allardyce’s Bolton side stopped the run by earning a 2-2 draw at Highbury.

Despite their impressive start, Arsenal would ultimately have to settle for second place in the Premier League, though an FA Cup victory provided some consolation.

Remarkably, none of the sides who saw their winning runs end at five games went on to win the title.

Liverpool need just one more win to equal their best ever start to a Premier League season, having registered six successive victories at the beginning of last season.

Having hammered West Ham 4-0 at Anfield on the opening day, Jurgen Klopp’s side would earn victories over Crystal Palace, Brighton, Leicester, Tottenham and Southampton before a draw with Chelsea ended their run in late September.

Their flying start saw them earn a record 97-point haul in the Premier League, though they had to settle for a runners-up place after Manchester City pipped them to the championship by just a single point.

Their disappointment was short-lived, however, as victory over Tottenham in the Champions League final saw the club crowned champions of Europe for a sixth time.

It meant the Spaniard equalled the league record for best managerial start, though the success was short-lived as City failed to build on their excellent start and finished third in the division.

Mauricio Pochettino’s Tottenham were the team to end City’s winning run, an Aleksandr Kolarov own goal and Dele Alli strike inflicting the first league defeat of Guardiola’s reign at the Etihad.

The equal best start by a new manager in the Premier League, Carlo Ancelotti began his Chelsea reign with six wins on the spin in 2009/10.

The Italian’s free-scoring Chelsea side dispatched of Hull, Sunderland, Fulham, Burnley, Stoke, and Tottenham to become the league’s early pace-setters, a position they would occupy at the end of the season as the completed a domestic double with FA Cup success.

Their run was surprisingly ended with a 3-1 defeat to Wigan at the DW Stadium, though it mattered little as they finished one point ahead of runners-up Manchester United, scoring 103 league goals throughout the course of the campaign.

Leicester, Coventry, Southampton, West Ham, Chelsea and Arsenal were all beaten, before a 1-1 draw at Liverpool halted the momentum.

Despite the setback, hopes were high that the Magpies could win a first league title since 1927, as they won nine of their opening 11 Premier League fixtures. However, star forward Cole would leave the club for rivals Manchester United in January, in a move that would prove a significant blow.

Keegan’s side would eventually finish sixth, missing out on Europe by just a single point after winning just 11 of their final 31 fixtures.

Comfortably the best start in Premier League history, Jose Mourinho’s Chelsea side marched to nine successive wins at the beginning of the 2005/06 season.

Having ended the club’s 50-year wait for a league title the season prior, Mourinho’s side began in ominous form by winning their first six fixtures without conceding a single goal. Aston Villa’s Luke Moore may have broken that record, though his goal mattered little as Chelsea won 2-1 at Stamford Bridge.

A 4-1 thrashing of European champions Liverpool at Anfield followed, before putting five past Bolton to make it nine wins on the bounce.

Everton would be the team to stop Chelsea making it ten, James Beattie’s penalty securing the Merseyside club a 1-1 draw at Goodison Park in late October.