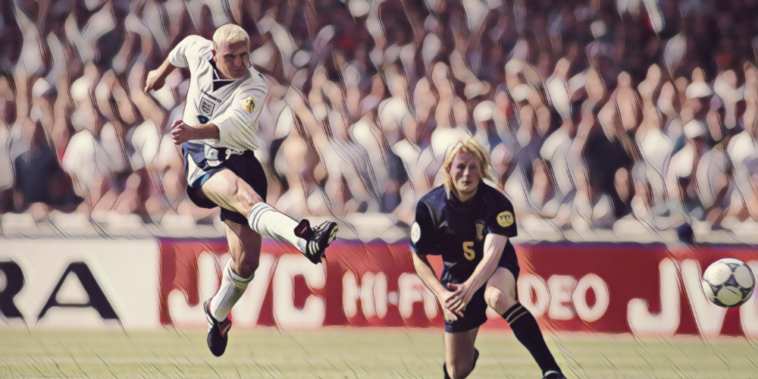 England against Scotland is world football’s oldest international rivalry and the latest meeting between the sides is a high-stakes clash in Euro 2020’s Group D.

For England, victory at Wembley will seal the Three Lions’ place in the knockout stages of this summer’s tournament, whilst Scotland will be hoping to get their campaign back on track after losing their opener to the Czech Republic.

Ahead of tonight’s clash and the 115th meeting between the historic rivals, we look back at five of the best games between England and Scotland.

Scotland will head into this evening’s clash as underdogs and seeking a 10th win at Wembley in their history, their very first triumph at England’s national stadium proving one to remember in 1928.

Scotland had already beaten England nine times on English soil, but never at Wembley, though that record was ended in emphatic fashion following a 5-1 thrashing of their rivals south of the border.

There were doubts over the Scottish side heading into the clash with England deemed favourites despite a poor recent record in the fixture, the Three Lions in possession of Everton legend Dixie Dean in attack, who was coming towards the end of his record-breaking 60-goal league campaign for the Toffees in 1927/28.

Scotland survived an early scare and took the lead after just three minutes through Alex Jackson, who finished the clash with a hat-trick, whilst Preston North End forward Alex James netted twice as England were hit for five at the national stadium.

Scotland’s winning side were dubbed ‘The Wembley Wizards’, though never played together again following this British Home Championship success.

It was Scotland who enjoyed the better of the rivalry during its formative years, before England began to enjoy greater success following the Second World War.

The Three Lions thrashed Scotland 7-2 during a memorable fixture in 1955, before eclipsing that triumph by scoring nine during an incredible 12-goal encounter six years later.

Future England manager Bobby Robson was amongst the goalscorers and opened the scoring, whilst Jimmy Greaves netted a hat-trick as Walter Winterbottom’s side ran riot in the highest-ever scoring fixture between the sides.

Bobby Smith and Johnny Haynes each scored twice with Bryan Douglas netting the other, whilst goalkeeper Frank Haffey – earning just his second cap in an inexperienced side that included four debutants – never played for Scotland again after shipping nine goals to the ‘Auld Enemy’.

England warmed up for their 1966 World Cup triumph with a thrilling victory over their oldest rivals, Alf Ramsey’s side edging a seven-goal classic at Hampden Park in the British Home Championship.

The visiting Three Lions had not won north of the border for eight years, but took a two-goal lead as forward pairing Roger Hunt and Geoff Hurst combined to devastating effect, before Denis Law rose to head home Willie Johnston’s corner to reduce the deficit.

Hunt restored England’s two-goal advantage shortly after the interval, though a determined Scotland fought back once again with Jimmy Johnstone beating Gordon Banks at his near post to poke home.

Bobby Charlton’s driven effort from distance made it four for England, only for Johnstone’s second – England undone from another set-piece – to set up a nervy finish.

England held firm despite coming under severe pressure in the closing stages, a confidence-boosting win ahead of their World Cup triumph on home soil later that summer.

Scotland defeated England 3-2 in another classic encounter the following year at Wembley, dubbing themselves as ‘unofficial world champions’ after beating the World Cup winners.

Friday’s encounter will be the first major tournament meeting between the rivals since Euro ’96, when Scotland faced the host nation at a feverish Wembley in the competition’s group stages.

English boos drowned out the Scottish national anthem pre-kick off in the first meeting between the two teams in seven years, with the fixture itself including an iconic goal and ensuing celebration from Paul Gascoigne.

Both sides had opened their campaigns with draws, against Switzerland and the Netherlands respectively, and it was England who secured the three points following a 2-0 win on home soil.

Alan Shearer opened the scoring after a cagey first half, meeting Gary Neville’s brilliant cross at the back post, though Scotland were handed an avenue back into the contest as Tony Adams clumsily brought down Gordon Durie.

David Seaman – with the self-claimed help of Uri Geller’s psychokinesis as the illusionist floated above Wembley in a helicopter, a bizarre sentence even when wrote more than two decades later – saved Gary McAlliser’s resulting penalty, with England securing three points just moments later.

Geller claimed to have moved the ball on the spot as McAllister was about to make contract and whilst doubt remains over the spoon-bender’s strange claims, there was plenty of magic about Gazza’s clincher.

Scampering forward towards a bouncing ball, Gascoigne took just two touches to score one of the Euro’s most iconic goals of all time.

The first lifted the ball over the bewildered Colin Hendry with his left foot, whilst the second volleyed the ball crisply beyond Andy Goram with his right as England took bragging rights and marched on towards the semi-finals.

Neutral fans will hope for a repeat of the previous meeting between England and Scotland, one which resulted in a dramatic conclusion as the two teams shared the spoils in a 2017 World Cup qualifier.

England had made light work of Scotland with a 3-0 win at Wembley in their first meeting, but travelling to a raucous Hampden Park proved a different affair entirely as Harry Kane’s late goal rescued a point for Gareth Southgate’s side.

Substitute Alex Oxlade-Chamberlain’s solo goal looked to have earned England a hard-fought 1-0 win north of the border, only for the game to turn on its head within the final three minutes.

Leigh Griffiths curled home a brilliant 87th-minute free-kick to restore parity and send the home crowd into raptures, with the Scotland fans in dreamland when the forward repeated the trick just minutes later.

Griffiths – from an almost identical position – bent the ball beyond the despairing dive of Joe Hart as the stadium officials announced four minutes of added time, but there proved to be one last sting in the tail to deny a famous Scotland victory.