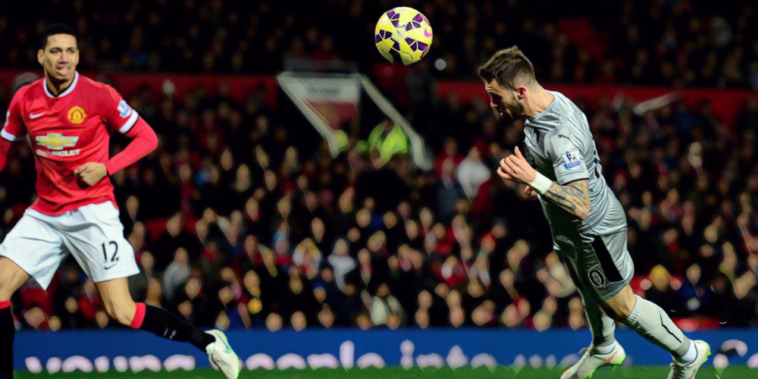 Diving headers are amongst the most spectacular methods of scoring in the game, an instant where footballers fling themselves mid-air in a desperate bid to make good connection with a crossed ball.

Whilst the diving header may never receive quite the same plaudits as solo stunners of thunderous efforts from distance, it’s a goal that deserves its own acclaim and appreciation as an art form.

We’ve decided to look back at some memorable efforts from the Premier League era, here are five of our favourite diving headers.

Ian Wright began the newly-formed Premier League as one of the division’s most dangerous forwards, finishing as the top-flight’s leading scorer in the final First Division campaign.

That Golden Boot-winning season included a hat-trick in a thrashing of Southampton, so it’s fair to say the Saints knew what to expect when Wright and the Gunners arrived at The Dell in 1993/94.

Wright repeated his hat-trick heroics of two seasons earlier in a 4-0 win for the north London side, his first demonstrating the forward’s athleticism and finishing ability as he flew through the air to meet Ian Selley’s cross and guide the ball into the far corner.

Wright’s header was the first of three scored, as he netted a second successive hat-trick after scoring three times against Ipswich in Arsenal’s previous fixture.

He remains one of just five players to have achieved the feat, alongside Les Ferdinand, Didier Drogba, Wayne Rooney and Harry Kane.

Muzzy Izzet proved a popular figure during an era of great success for Leicester City, signing on an initial loan deal from Chelsea before becoming an integral part of the Foxes’ rise in the late nineties.

Izzet helped the club to promotion before a brace of League Cup triumphs in 1997 and 2000, whilst the former Turkey international provided his fair share of spectacular moments across 281 Leicester appearances.

Izzet often provided a sprinkling of star quality on an industrious Foxes’ midfield, scoring several long-range efforts and this brilliant diving header in a 4-0 thrashing of Derby.

Bursting forward from inside the centre circle to join Emile Heskey in attack, Izzet powers into the penalty box to meet the forward’s cross and double the Foxes’ lead, as Leicester secured East Midlands bragging rights.

The goal amongst this list that most definitely had the greatest consequences, Jimmy Floyd Hasselbaink’s headed effort against Arsenal helped derail the Gunners’ title bid in 1998/99.

Arsenal arrived at Elland Road for the penultimate fixture of the Premier League season as defending champions, with the north London side leading a tight title race from rivals Manchester United.

Arsene Wenger’s side found themselves on the wrong side of a 1-0 scoreline however, as Hasselbaink – winner of the division’s Golden Boot the previous season – leapt to meet Harry Kewell’s tantalising cross from the left.

Hasselbaink’s goal came just four minutes from time and secured all three points for a Leeds team heading for a top-four finish, the defeat proving costly for Arsenal who were pipped to the title by just a single point by Sir Alex Ferguson’s treble-winning United side on the final day.

Shaun Bartlett scored some sensational goals during a memorable six-year spell at Charlton, including a wondrous volley against Leicester that won the division’s Goal of the Season accolade in 2000/01.

Four seasons later and the South Africa international was the architect of a thrilling 3-2 derby win at Tottenham, scoring twice to pile the pressure on Spurs following the departure of manager Jacques Santini.

Bartlett was later sent off for a deliberate handball as Spurs fought back through goals from Robbie Keane and Jermain Defoe, but the visitors held on to leapfrog their cross-capital rivals in the Premier League table.

Danny Ings has been one of the Premier League’s best penalty-box poachers in recent seasons, with the forward first rising to top-flight prominence after scoring 11 goals for Burnley during the 2014/15 campaign.

Ings’ return was not enough to keep the Clarets in the Premier League, but earned the star a summer switch to Liverpool who had been impressed by his goalscoring instincts.

Amongst his goals came this diving header against Manchester United at Old Trafford, meeting Kieran Trippier’s cross to equalise after Chris Smalling’s early opener for the home side.

There's nothing quite like a full-length diving header, right @IngsDanny?#GoalOfTheDay @BurnleyOfficial pic.twitter.com/wmwSu50feU

Ings’ movement is what makes this a fantastic goal from the Burnley man, a feigned first run towards the near post, before peeling off behind Smalling to head home past David de Gea.