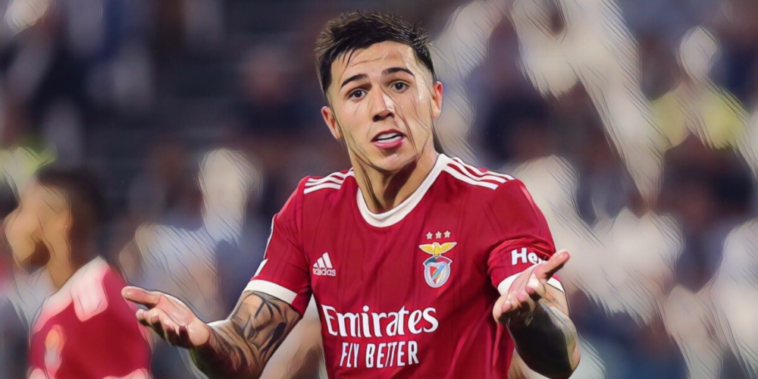 Benfica are trying to convince Enzo Fernandez to ignore interest from Chelsea and remain at the club until the summer.

Chelsea are interested in a deal to sign Fernandez next month and have made the midfielder a top target following his performances at the 2022 FIFA World Cup. The 21-year-old was named as the tournament’s Best Young Player, following his role in Argentina’s victorious campaign in Qatar.

Chelsea are pursuing a deal despite Benfica’s reluctance to sell Fernandez, who has a release clause of around £106m in his contract. According to the Times, Benfica are aiming to persuade Fernandez to turn down interest from England and wait until the summer for a high-profile move.

Fernandez signed for Benfica from River Plate in a £15m deal last summer, but has since seen his reputation enhance in Portugal. He earned his first cap for Argentina in September, before having a prominent role in their World Cup success earlier this month.

Chelsea are reportedly willing to meet his release clause in what would represent a British transfer-record deal, as the Blues look to back Graham Potter and beat off competition from the likes of Manchester United and Liverpool.

Fernandez has been made a top target for the club’s midfield rebuild, alongside West Ham’s Declan Rice and Borussia Dortmund’s Jude Bellingham.

Chelsea are set for an active January window having confirmed a deal for Molde teenager David Datro Fofana, while the Blues also remain in negotiations with Monaco over a £35m deal for centre-back Benoît Badiashile.