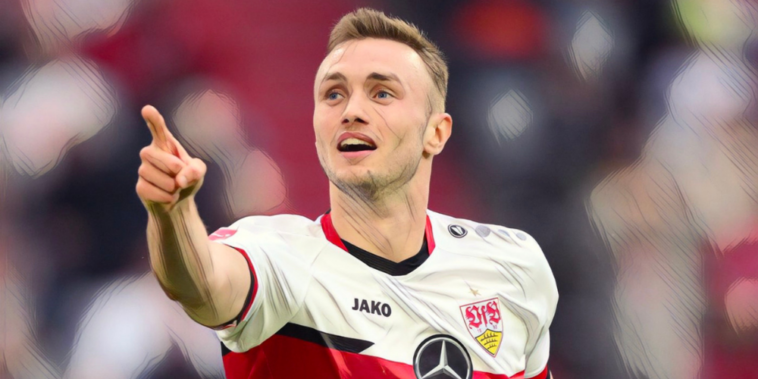 Bayern Munich have joined the race to sign Sasa Kalajdzic with the Bundesliga champions ‘in talks’ to sign the Stuttgart forward.

Kalajdzic is attracting interest from across Europe with Manchester United among the clubs linked with a move for the 24-year-old, who scored 16 goals during his maiden Bundesliga campaign in 2020/21.

The Austria international returned from a long absence with a shoulder problem to find form during the Bundesliga’s run-in, with five goals across the final nine games of the campaign.

The Mirror are reporting that the Red Devils are considering an approach for the 6ft 7in star, as the club consider cheaper alternatives to Benfica forward Darwin Nunez.

Kalajdzic is valued at around €25m (£21m) by Stuttgart and the club’s sporting director, Sven Mislintat, recently revealed it is not very likely” he will remain at the German side next season.

United are set to face competition from Bayern Munich however, who according to Sky Sports are in talks with Stuttgart over a deal.

The move comes amid uncertainty surrounding the future of Robert Lewandowski, who has informed the Bundesliga champions of his desire to leave the club this summer.

Barcelona have been credited with an interest in signing the 34-year-old, who scored 35 league goals in 2021/22 to finish as Germany’s leading scorer for a fifth consecutive season and joint-record seventh time overall.

Bayern sporting director, Hasan Salihamidzic, confirmed Lewandowski’s desire to leave the club, though insisted the Bavarians have no intention of selling the forward this summer.

“I spoke to Lewa. In the conversation he told me that he did not want to accept our offer to extend the contract and that he would like to leave the club,” he told Sky.

“He said that he would like to do something else but our attitude hasn’t changed.

“Lewa has a contract until June 30, 2023. That’s a fact. I don’t deal with that because our stance has always been clear.”