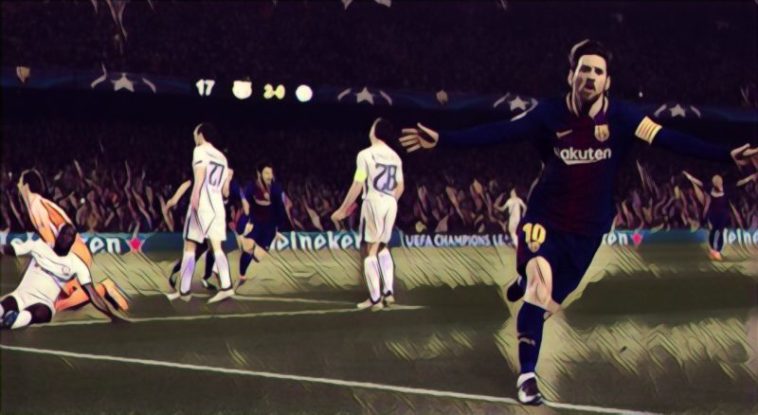 The little magician Lionel Messi put on a show in Camp Nou on Wednesday, scoring two goals and an assist in Barcelona’s 3-0 win over Chelsea.

After 12 years, he shook off his Chelsea demons when he scored his first goal against the West London club in the first leg of the Round-of-16 matchup in the Champions League.

Finally, with the monkey off his back, he put two goals through Thibaut Courtois’ legs, and teed up Ousmane Dembele to ensure the win to advance to the quarter-finals on an aggregate score of 4-1.

Messi’s second goal in the 63rd minute was extra special for the Argentine. He has now scored 100 career Champions League goals in 123 matches.

Chelsea were held scoreless in the second leg after a heroic counter-attacking performance at Stamford Bridge. The Blues were more proactive going forward on Wednesday, but it means little in the final score. Chelsea bow out of the Champions League and will have to work hard domestically to earn a top-four spot in the table to qualify for next year.

Here are five things we learned from Barcelona’s win over Chelsea.

How lucky are we to be a part of a generation that gets to watch arguably one of the greatest players of all-time to play this game? This must how people felt when they got to watch Pele lace up his boots.

The 3-0 scoreline really doesn’t tell the whole story. Barcelona actually had fewer chances in attack than Chelsea did in the match. This wasn’t a typical match at Camp Nou where the home team would completely dominate possession.

Messi carried the team on his shoulders with devastating counter-attacks. Every time he touched the ball, every Chelsea defender would be scrambling to mark him, giving team-mates like Dembele space with a clear shot on goal.

Even when he doesn’t lay it off to anyone else, he managed to score two goals. One of them were in the tightest of angles. Odds of scoring like that for your average player are slim, but that didn’t matter to Messi as he confidently put both of his finishes through the goalkeeper’s legs.

Messi has now scored 100 goals in the Champions League, and in fewer matches than his archrival Cristiano Ronaldo. Simply put, it has been a joy to watch the Barcelona star play throughout his career.

Chelsea were forced to attack from the first whistle onward. The Blues were trailing on away goals, and a scoreless game would do them no good. Starting Olivier Giroud showed their attacking intent and a change in tactics from the first leg.

The away team started the game off well, even though they gave up the opening goal in the third minute. It didn’t change the narrative of the match yet. Chelsea attacked well, unlike the matchup in 2012 where they defended like their lives depended on it.

Giroud was expected to hold the ball centrally to allow Willian and Eden Hazard time and space to run. His first touch failed him today, mostly due to smothering defence from Samuel Umtiti and Gerard Pique.

It was an odd game for Barcelona who only had 55% possession. It’s far from their usual statistics. However, they didn’t allow much to reach Marc-Andre ter Stegen who only needed to make three saves.

Chelsea threatened but nothing more

Chelsea were on the front foot for a large portion of the match. They attempted 14 shots, six more than their opponents. Then again, only three of them were on target.

The Blues looked like they were going to score after long periods in the Barcelona half. The start of both halves gave hope to the away fans, that the Chelsea lion had some bite. Instead, all they got was a roar and nothing more.

The forwards weren’t on the same page on Wednesday, and frustration showed in their faces when attack after attack failed to lead to a goal. They made questionable runs in support of each other, and the ball was constantly lost.

Wednesday was a case of an unlucky day at the office for Chelsea. It was something they had to do since they needed a goal. Playing attacking football at Camp Nou is always risky, and it’s too bad they didn’t get a big reward for it.

There aren’t many positives for Chelsea fans after the exit from the Champions League, but the way they played should be praised.

Chelsea hit rock bottom when they lost 1-0 to Manchester City. The Blues surrendered to the soon-to-be Premier League champions without putting up a fight.

The matchup between Barcelona and Chelsea was certainly the hardest tie that was drawn for the Round-of-16. Even though they lost with a quite terrible scoreline, the West London club did put their best effort into the match.

Losses happen time and time again. It’s important to see how Chelsea responds to the early exit as they’re still competing in the FA Cup and for Champions League qualification spots in the domestic table.

Yeah, Chelsea fans can be hopeful about the future, but the loss to Barcelona could lead to disaster waiting to happen.

European football for 2019 isn’t a guarantee for fifth-place Chelsea. They currently sit four points behind Liverpool with only eight games left in the season.

Chelsea’s form as of late hasn’t been great domestically, but key matchups against Tottenham and Liverpool could ultimately be deciding factors. The Blues need to quickly bounce back from Wednesday’s defeat, or they could be in a lot of trouble.

Without Champions League football, Chelsea will find it harder to retain Hazard and Courtois. Both have yet to sign a new contract, and both could be looking to take their services elsewhere if Chelsea cannot turn it around.