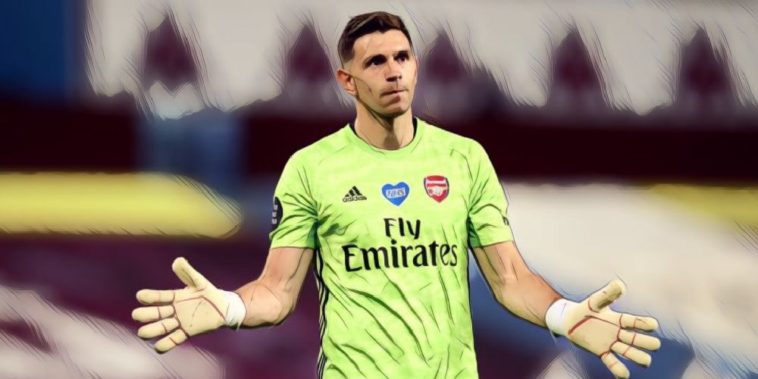 Arsenal goalkeeper Emiliano Martinez is reportedly attracting attention from Aston Villa following his impressive spell between the sticks in the absence of Bernd Leno.

Regular Gunners number one Leno suffered knee ligament damage during a clash with Brighton’s Neal Maupay back in June following the Premier League‘s restart, though Martinez performed admirably in his absence, helping the club to a record-extending 14th FA Cup triumph.

Over the brief summer break, the Argentine admitted he would like to stay at Arsenal, but also expressed his desire to play ‘as many minutes as possible’, saying 10 clubs across the continent were interested in his services.

“I want to stay at Arsenal, but if I play more minutes,” he told Marca earlier this month. “Because on a personal level, I have an age, I am in a game with confidence that I need to add as many minutes as possible.

“I am in the sights of 10 teams in Europe. But I can’t say who those clubs are, because it’s nothing concrete. I still do not have the clear situation with Arsenal, when I have it when I return I will make the best decision for my career.”

Now, according to the Independent, one of those options could be a move up the M6, with Aston Villa said to be ‘preparing a £10 million’ offer for the ‘keeper, though that could be significantly short of Arsenal‘s asking price, the report saying they would want ‘as much as double’.

The Villains have been without regular first-choice goalkeeper Tom Heaton since he suffered a serious knee injury against his former side Burnley on New Years Day, with the 34-year-old’s stand-ins hardly covering themselves in glory in his absence.

Orjan Nyland got away with one of the clangers of the season when he carried the ball over the line against Sheffield United, only for it to be inexplicably missed by the goal decision system, while Pepe Reina’s loan spell at the club has expired, since leaving AC Milan to join Lazio.

Speaking ahead of Saturday’s Community Shield against Liverpool, Mikel Arteta expressed his desire to keep Martinez at the club in order for him to challenge Leno.

“I love to have two goalkeepers at the level of Bernd and Emi,” said the Spaniard. “Last season, when Bernd got injured, if somebody had some doubts about Emi’s character or qualities then he’s shown what he’s able to do and he didn’t do it for one game, he did it for 10 or 11 games in a row. I’m delighted to have both of them. But they both know that on the first day of pre-season, you start again and fight for your place and show us who is the one that deserves the chance to start.

“I don’t want to keep them both happy, I want the one that is not playing to be upset. But upset and then challenge the next player to make him better, or if not, earn his place to do that. It’s not easy to do that. I personally don’t see any different with goalkeepers to full-backs. They know that, I’ve been really clear with them and hopefully they can make each other better and hopefully the team better.”