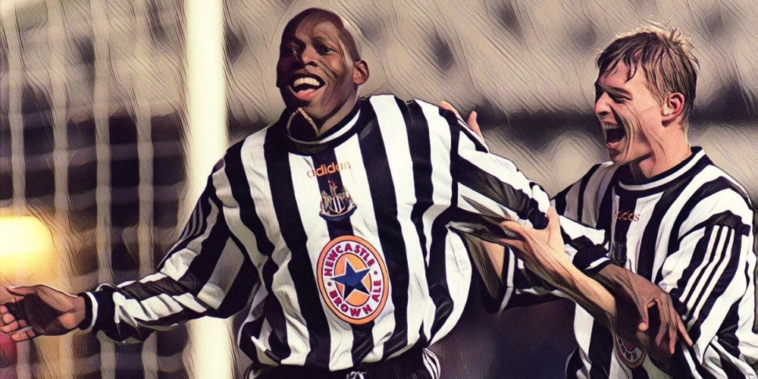 Faustino Asprilla is a footballer who evokes fond memories from the thousands of fans who take residence inside Newcastle United’s St James’ Park home.

Signed during the most exciting period in the club’s modern history, he was an import of calibre and came in the midst of the Premier League’s boom in compelling captures from foreign shores.

Asprilla had risen to notoriety during a spell at Parma, whose cult sides of the nineties remains some of the most fondly remembered from a golden age for Serie A.

Featuring alongside the likes of Gianfranco Zola and Dino Baggio at the Italian outfit, he scored 40 goals across all competitions during three-and-a-half seasons with Parma, winning the European Cup Winners’ Cup, UEFA Cup and Super Cup amongst his accolades.

Asprilla’s falling out with Parma manager Nevio Scala allowed Newcastle to make their move however, as Kevin Keegan sought to strengthen a side seemingly racing towards the Premier League title.

Arriving on a private jet and clad in a fur coat to combat the bitter north eastern cold, the Colombian was instant box-office viewing as he made a Hollywood entrance at Newcastle.

He made an immediate impact off the bench to help turn defeat into victory at Middlesbrough, but his signing proved problematic for Keegan’s title-chasing side as the manager sought to shoe-horn Asprilla into the side.

He’d taken a flight from Italy in the morning, had a glass of wine on the team bus (not expecting to play), then came on as sub to set up a win at the Riverside.

Asprilla – despite his own fine performances – seemed to unsettle the side alongside fellow arrival David Batty as Newcastle spectacularly blew their lead at the summit to finish as runners-up to Manchester United.

It was a period which arguably symbolised Tino’s time at Newcastle, occasionally fantastic, often frustrating, but always unmissable viewing.

The bright lights of the Champions League came to Newcastle following a second successive runners-up finish in 1996/97, with the Magpies handed a glamour tie against Barcelona in the group stage.

Luis Figo, Luis Enrique and Rivaldo were all amongst the Catalan contingent to make the journey to St James’ Park, as the club’s supporters welcome one of Europe’s most glamorous sides.

Louis van Gaal’s side were in a period of transition, but still possessed an elite collection of players who would soon be made to look ordinary by a Newcastle team roared on by their vocal support.

It was Asprilla who took centre stage.

Newcastle – now under the management of Kenny Dalglish following Keegan’s shock resignation – started on the front foot with their energy unnerving their illustrious visitors in the opening exchanges.

Asprilla was menacing from the off, full of pace and purpose and the elastic-legged trickery that left his audience captivated and opposition confused.

It was Asprilla’s alertness that led to the opening goal of the game, racing in behind before being brought down by goalkeeper Ruud Hesp, with referee Pierluigi Collina pointing to the spot.

The Colombian picked himself up off the turf to convert the spot-kick, the power on the penalty enough to see it past Hesp despite the goalkeeper guessing the right way.

As confidence coursed through the hosts they pushed forward in search of further reward, a second goal coming just minutes later as Asprilla raised the roof at St James’ Park.

Keith Gillespie’s run and cross into the centre was met emphatically by the soaring South American, who rose magnificently to power home a header and double the Magpies’ advantage.

Three minutes after the interval and the same combination once again exposed the frailties in the visitors’ defence, as a rejuvenated Gillespie once again marauded past his man before delivering a cross of perfect precision.

Finding himself between the Barcelona centre-backs, the fizzed delivery was met with another thudding header from Asprilla who sealed his hat-trick as an elated St James’ Park erupted in disbelief and pandemonium.

This was a Champions League debut to dream of for Newcastle, with the maverick magic of their Colombian centre-forward have been the catalyst for a European upset.

Barcelona rallied and goals from Enrique and Figo set up a nervy finish for those inside the ground, but at the full-time whistle the Magpies were celebrating a famous night and an iconic individual showing from Asprilla.

His brilliance against Barcelona proved his last meaningful contribution to the club as he returned to Parma the following January, having largely failed to see eye-to-eye with Dalglish.

His departure saw the Premier League wave goodbye to one of its most colourful characters, the care-free Colombian whose love of scoring goals was matched only by his passion for the Newcastle nightlife.

Languid and laid-back, he occasionally turned it on when it truly mattered most and his hat-trick against the Catalan giants stands as arguably – even probably – Newcastle’s finest individual showing in continental competition.

It was the finest hour of a bona fide cult hero and the everlasting memory of his eccentric period in the Premier League. Newcastle’s side of the mid-nineties was rightly lauded as the ‘Entertainers’, and there were few more entertaining players than Faustino Asprilla.