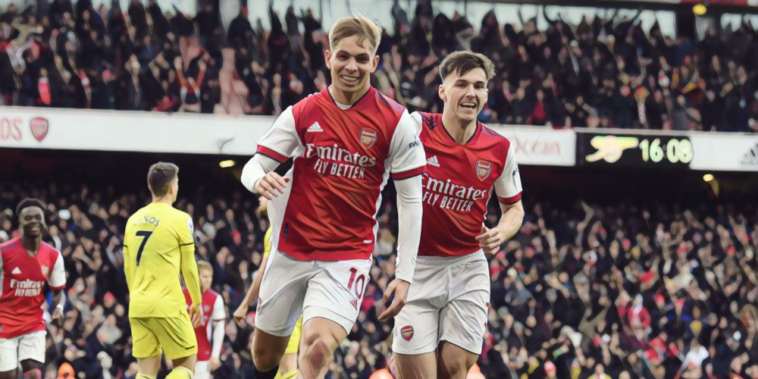 Mikel Arteta says Emile Smith Rowe’s numbers this season are ‘not a coincidence’ and has praised the midfielder’s development at Arsenal.

Smith Rowe scored as Arsenal continued their push for a top four finish with a 2-1 win over Brentford last weekend, netting his ninth Premier League goal of the season at the Emirates.

The 21-year-old is the Gunners’ leading scorer in all competitions this season and his impressive season earned Smith Rowe a first call up to the England squad in November, scoring in the Three Lions’ win over San Marino.

Having found himself in and out of the team in recent weeks, he returned with another goal against the Bees and Arteta says his impressive numbers are a just reward for Smith Rowe’s hard work on the training ground.

“The numbers should be looking something like this and that’s not a coincidence,” Arteta told his pre-match press conference ahead of Arsenal’s clash with Wolves. “He’s practising every day, he is working, he has willingness to do it because he knows he has the qualities and the capacity to do it. That’s what we have to demand from players whether they are 19 or 20 or 35.

“I think it’s [down to] a combination of everything. It’s in his nature, he needs to feel that confidence and that trust around the coaching staff that we are the right people to guide him and to take him to the next level.

“He needs his team-mates, which are big contributors to what he can do on the pitch. He needs to feel love, he needs to have the right environment around him, his family, girlfriend or whatever next to him, and when that happens, he has got a good chance.”