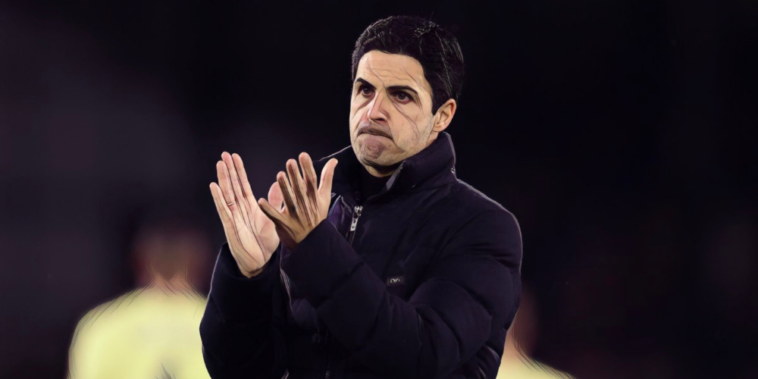 Mikel Arteta has reflected on a poor performance from Arsenal after the Gunners were beaten 3-0 at Crystal Palace.

Arsenal’s hopes of Champions League football suffered a setback as the North Londoners missed the chance to move back into the top four after a disappointing defeat at Selhurst Park.

Arteta’s side were two goals down inside the opening 24 minutes through goals from Jean-Philippe Mateta and Jordan Ayew, before a second-half penalty from Wilfried Zaha secured an emphatic and deserved win for the Eagles.

Arteta admitted his side’s showing was ‘unacceptable’ and says Arsenal must regroup ahead of Brighton’s visit to the Emirates this weekend.

“We were late to every ball, we were soft in the duels and we didn’t earn the right to play, and when we did a little bit we were sloppy on the ball. We didn’t have any dominance or sequences of play when we could take control of the game and we conceded two poor goals as well, so overall it’s unacceptable. We need to put our hands up, apologies, regroup, and tomorrow is a new day and a new opportunity to prepare for the game against Brighton.”

Arsenal had won six of their previous seven Premier League fixtures before the loss to Crystal Palace, a run of results which had moved the Gunners into a strong position to secure Champions League football.

Arteta admitted he did not see his side’s performance coming after an impressive run of form and conceded Arsenal failed to compete with the Eagles throughout.

“No, I could not see it. We discussed it just before the kick-off, the way you win here is when you compete in the way that you should, and competing means winning duels and having composure on the pitch to manage the situations.

“They are a really physical team and the pitch is not at the best to do that, so you have to find ways to do other things that usually you don’t have to do, and we didn’t manage to do that.”

Tottenham’s 5-1 win over Newcastle on Sunday moved their North London rivals above Arsenal and into the top four, with the two teams now level on points in the race for Champions League qualification.

Arteta dismissed the notion his side had felt the pressure of the top four race after Spurs’ win, but conceded the Gunners were ‘second best in every department’ at Palace.

“No because the pressure has been there for the last seven or eight weeks.

“We are talking all the time about the race for the top four and the boys have been performing extremely well and getting the results and playing really well.

“Today we didn’t perform and it’s as simple as that, we were second best in every department, especially in the first half, and when we tried to change in the second half, we did and we played much more of the game that we wanted to play. In the final moments we had three of four big chances that we didn’t score to get back and give ourselves a chance to get back in the game.”

The Spaniard refused to blame a lack of squad depth for Arsenal’s defeat, having allowed several senior players to depart during the January window without replacements.

Pierre-Emerick Aubameyang and Ainsley Maitland-Niles were among those whose winter exits have reduced the numbers in Arteta’s squad, but the Arsenal boss reiterated that his side only have themselves to blame for their latest loss.

“It’s what we have, it’s the numbers that we have. We’ve lost Kieran and we’ve lost Thomas now and that’s it. With the players that we have we will keep trying like we have since the start of the season, but we never had a big squad so we can’t find any excuses. Today we have to look at ourselves and I’m the first one because I repeat myself, it wasn’t good enough.”

Arteta also provided an update on Kieran Tierney, who missed the clash with Palace after sustaining a knee injury on international duty last week.

The Scotland defender is set to see a specialist to reveal the extent of the problem, but Arteta admitted the initial prognosis ‘wasn’t really positive’.

“He’s seeing a specialist tomorrow and we will know more about the extent of the injury then, but the feeling that he had it wasn’t really positive and what the scan showed either, but we will have to wait and see what happens.”