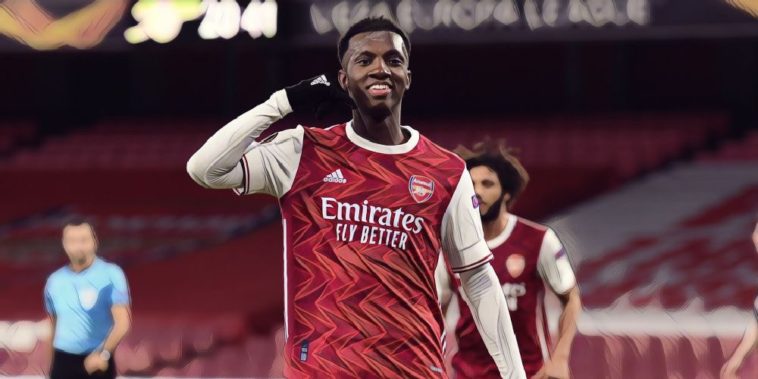 Mikel Arteta was delighted as his ‘disciplined’ Arsenal side battled their way to a 3-0 win over Irish side Dundalk in the Europa League on Thursday.

The home side made ten changes from the side that lost to Leicester at the weekend, with only Granit Xhaka retaining his place in midfield, while summer signing Alex Runarsson was handed his first start between the sticks.

Despite the number of changes the Gunners starting XI was still brimming with quality, and to Dundalk’s credit, there was little between the two sides in the opening 40 minutes. When the Premier League outfit did finally break the deadlock, it came courtesy of an unfortunate error from ‘keeper Gary Rogers, the 39-year-old failing to deal with a Reiss Nelson corner to allow Eddie Nketiah to tap home.

Arteta’s men made it two soon after, midfielder Joe Willock firing high into the net past a helpless Rogers and giving the away side a mountain to climb heading in at the break. Things got worse almost instantly after the interval for the Irish side, however, as Nicolas Pepe curled a delightful effort into the top right-hand corner to all but secure three points.

The spirited visitors were under the cosh for the remainder of the half as Arsenal continued to probe, with England U21 international Nketiah squandering a couple of good chances late on as the Gunners coasted to victory.

Speaking afterwards, Mikel Arteta was impressed with how his ‘disciplined’ side ‘made it look easy’.

Three goals in the space of four minutes for Arsenal. pic.twitter.com/PrHI9tLPoJ

“We made it look easy because we were very disciplined, took it seriously and were at it from the beginning,” Arteta told BT Sport.

“We made a lot of changes, gave opportunities to other players and I think they performed well.

“We have a large squad and I wanted to give opportunities to everybody. Today they showed they were prepared when I need them and today they made it more difficult me for selection.

“We missed Willian the last couple of weeks, he had a very short pre-season. He needs that bit of rhythm. He looked good today, great to get some minutes in his legs.

“After losing the way we lost against Leicester it was painful. It took is a few days to react but good to respond straight away with a win and now we go to Old Trafford and try to win again.”

The Gunners will be hoping to get bounce back from successive Premier League defeats when they face Manchester United at Old Trafford on Sunday afternoon.