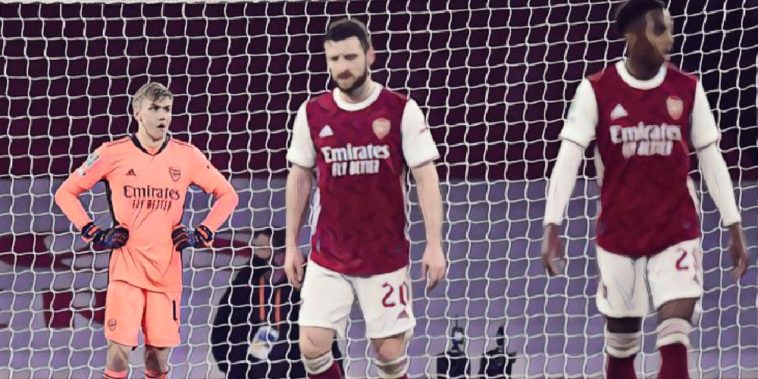 Mikel Arteta has lamented the conceding of ‘soft’ goals as Arsenal crashed out of the Carabao Cup with a 4-1 defeat to Manchester City at the Emirates.

Arsenal‘s wretched recent form continued with a home humbling to Manchester City in the last eight, stretching their run without a win in domestic competitions to eight games and piling yet more pressure on the under-fire Arteta.

The north London side have endured their worst-ever start to a Premier League season and an upturn in form appears no closer following their cup exit, goalkeeper Runar Alex Runarsson enduring an evening to forget after allowing Riyad Mahrez’s free-kick to squirm through his gloves.

Arsenal were second best throughout and some slack marking cost them dearly with Gabriel Jesus’ opener after just three minutes, and Arteta has criticised the ‘soft’ goals his side conceded in another lowlight of a difficult season to date.

“We started the game by conceding a really early and really soft goal and after that, in this moment, to get through that is obviously difficult. But the players reacted to be fair and they started to grow as the game was moving forwards.

“We scored a goal, a really good goal and after that I think that we were the better team for the next 25 minutes. But when we had the best moments in the game, we conceded another soft goal and that makes it even harder.

“But still, we kept going and we had an open situation where we could’ve played Laca through and we missed the pass and then they scored the third goal in an offside position.

“Obviously after that moment, the game is over.”

Arteta’s comments regarding City’s third goal come after Phil Foden appeared to be in an offside position before scoring for the visitors, though the absence of a video assistant referee saw the goal stand.

The Spaniard admits that luck is going against his side at present, though says the Gunners will ‘keep fighting’ as they bid to turn their fortunes around.

“It is something that we are fighting against but we’re going to keep fighting,” he added. “There isn’t any other way.

“It’s a really hard result to take but we have to look at things that can help us in the future as well.

“I have to say that the young players, in a really difficult scenario, I think they did really well.”

Read – The item at the top of each Premier League managers Xmas wish list: Part one