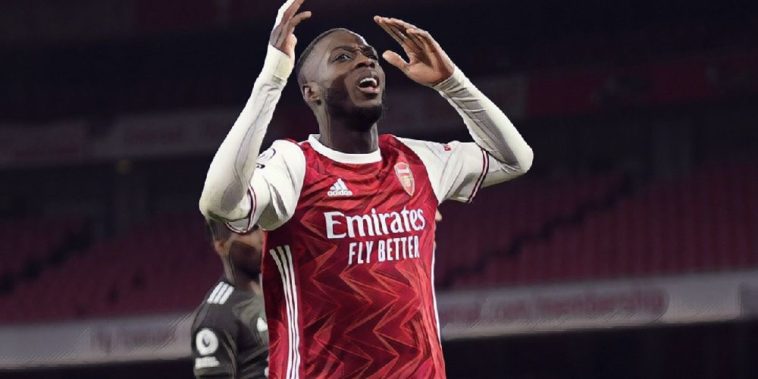 Arsenal boss Mikel Arteta has admitted he is keen to see more from club-record signing Nicolas Pepe, although has ruled out a January departure for the forward.

Despite notable flashes of quality, the 26-year-old has largely underwhelmed since his arrival from Ligue 1 side Lille in 2019, struggling both for consistency and game time in north London.

While he ended the last campaign on a high with a flurry of goals – finishing the season with 16 in all competitions – the Ivorian has failed to kick on so far this term, having seen the likes of Bukayo Saka and Emile Smith Rowe move firmly ahead in the Arsenal pecking order.

Doubts remain over whether the winger will ever repay his hefty £72m price tag, although current Gunners boss Arteta admitted it was ‘difficult’ to answer whether or not the player has been value for money thus far.

“We will see in the next few seasons if he is capable of achieving what we expect from him. But that is a difficult answer, not only with him but with any player.

“The value-for-money question is very particular. Is it just for individual performance or do you put their collective performance too? Because to pay money for a player, and you are in the Champions League, is value for money. It is difficult to answer.”

Ahead of Saturday’s clash with bottom-side Newcastle United, the Magpies have been linked as a potential destination for Pepe, with Arteta asked if a departure is possible in January.

“No, and it is not the moment to talk about that either,” he said.

While an exit doesn’t appear to be on the cards, the Spaniard did stress the need for ‘consistency’ from the former Angers man in order to regain his starting berth.

“Nico has very specific qualities that, when he can put them in place, are magnificent and we have talked about consistency,” Arteta said. “Nico needs to try to do what he is doing and even raise the level, and that is what we want as then the team will be better.”