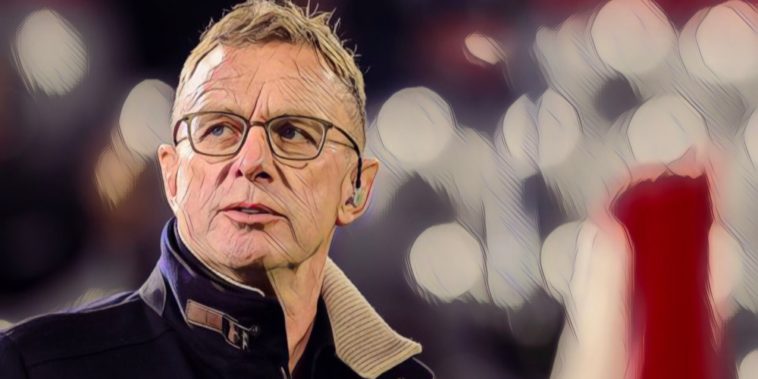 It’s not an exaggeration to say that hiring Ralf Rangnick as interim manager and as a club consultant in the long-term could be one of the best decisions Manchester United have made in the post-Ferguson era.

The history of football is littered with figures who, through the force of their will and the brilliance of their thought, leave an indelible mark on how the game is played. Ralf Rangnick is one such figure.

His accolades in the game are seemingly not becoming of an elite coach, yet the fact that his influence reverberates through Europe’s best teams — Ajax, Bayern Munich, Liverpool, Manchester City, and Chelsea — is a testament to the sweeping impact he’s had on the modern game. Such extensive influence stems from his fervent belief in a particular way of coaching and playing football — the sort of defined vision that Manchester United have been sorely lacking.

During his coaching spells at Hoffenheim and RB Leipzig, Rangnick implemented his ideas to astounding effect: taking both clubs from the lower divisions of German football to mainstays in the Bundesliga. The formations he used – a 4-3-3 at Hoffenheim and a 4-2-2-2 at Leipzig – didn’t alter the principles that underlined but instead changed the location of his team’s press. While the 4-3-3 played in a mid-block and pressed more in the midfield area, the 4-2-2-2 played an extremely high line that did most of its pressing in the opposition half.

Some pressing triggers that remain common throughout his teams are lateral passes between centre-backs, a pass out wide to a fullback, or a pass played on a defender’s weaker foot. When these triggers occur, a press with two main components begins.

First, two players will apply pressure to the man with the ball in an attempt to both retrieve possession directly and block lateral passing lanes. Then, based on the body positioning of the opposition player, the team will try to create numerical superiority in the area of the pitch the pass is being played into.

Jurgen Klopp and Julian Nagelsmann know what Ralf Rangnick is all about 👀 pic.twitter.com/FeTpPzan9s

For example, if a fullback is trying to pass inside to a central midfielder, Rangnick will instruct the team to overload the midfield area so that any opposition player who receives the ball will immediately be under pressure. The variations he creates of these scenarios are the pressing traps. By dividing the area that his teams have to defend into these smaller segments, he is able to employ an incredibly intense and effective defensive strategy that then serves as a springboard for counter-attacks.

Rangnick has so much faith in the efficacy of pressing that he will instruct his teams to occasionally hit high-risk long-balls simply to create an opportunity for a counter-press rather than trying to construct an attack methodically through the thirds. It’s worth noting, though, that this is only one aspect of his attacking play. He also adopts a clear structure in possession with rehearsed movements that enable his teams to unlock deeper sitting defences.

Just breaking my Twitter hiatus to emphatically say Jürgen Klopp did not get his love of hard pressing football from Ralf Rangnick – which I’ve read about 10 times this week. Wolfgang Frank was Klopp’s mentor, who in turn was influenced by Arrigo Sacchi.

From a purely tactical perspective, Rangnick already has plenty to offer Manchester United. What will be truly beneficial for the club, though, is his long-term strategic planning of organising a football operation.

At RB Leipzig, Rangnick demonstrated his capacity to oversee changes in scouting, youth academies, and recruitment that facilitated the club’s meteoric rise in German football. Due to his clear and precise idea of how football should be played, he is able to base the rest of the club’s operations around how to best execute that vision. That entails the signing of young players and intelligent training regimes that optimise players’ physical and mental sharpness so that they can adapt to such an intense style.

All of these changes are precisely what United need to fulfil their potential. They have a talented squad, and with Rangnick, they can ensure they don’t squander it. His impact in terms of results in the next six months may well be underwhelming as his ideas are difficult to adapt to could take time to implement successfully. But truly, his arrival in Manchester isn’t about what happens this season. It’s about creating the conditions for the next permanent manager to have a genuine chance at success.

In Ralf Rangnick, Manchester United have found an individual who can give the club a long-term blueprint for sustained success.