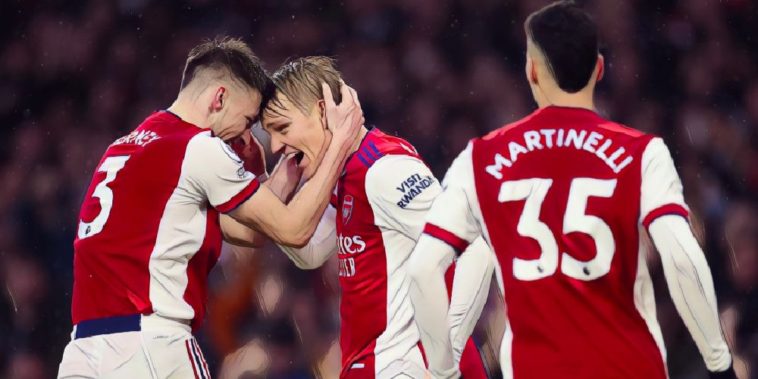 Arsenal bounced back from back-to-back defeats with a clinical 3-0 win over Southampton at the Emirates on Saturday.

The big story pre-match was the omission of captain Pierre-Emerick Aubameyang from the matchday squad, with manager Mikel Arteta revealing that the Gabon international had been left out owing to a ‘disciplinary breach’.

That left stand-in skipper Alexandre Lacazette to lead the line in his teammate’s absence – as he had done in the defeat at Goodison Park – with the Frenchman swiftly making his mark with a brilliant early strike at the end of a lovely, sweeping team move to put the hosts ahead.

The away side had in fact made the better start, although one soon became two as summer arrival Martin Odegaard netted for the third game running, the Norwegian heading in past debutant Willy Caballero having been afforded far too much time and space by the Saints’ defence.

It got even worse for Ralph Hasenhuttl’s side just after the hour mark as Gabriel headed home from Gabriel Martinelli’s cross, the defender having seen a goal disallowed for offside just moments earlier.

Martinelli and Saka then both hit the post, while Takehiro Tomiyasu saw an effort well saved by veteran stopper Caballero, with Arteta’s men seemingly intent on inflicting even more damage.

That proved to be the end of the drama, however, as Arsenal cruised to a first win in three in the Premier League, with Arteta delighted after the game to have got the win after a ‘difficult period’.

Bukayo Saka (22) is the only Arsenal player to provide 20+ assists across all competitions since the start of the 2019/20 season.

Hale End does it again. 🤩 pic.twitter.com/P5HyCtnRtj

“I’m very pleased. After a difficult period, we had two defeats where I don’t think we deserved to lose the games but we did,” he told Match of the Day.

“We started the game a little bit nervy, you could tell that we were carrying that feeling still, but we finished strong.”

The Spaniard was understandably beaming at the Gunners opener which came after a stunning team move straight from back to front.

“It was [a ‘piece of art’] – that’s our identity, the way we want to play, it’s not possible to score all the goals like that. But that’s the direction we want to take.

“I am very happy. It’s a contribution from the whole game, what is required in every moment and then the execution and that’s what we’ve been lacking a little bit, because the intention is there, it’s just doing it more consistently.

“You could see that the team wanted to keep attacking, hit the post twice, a goal disallowed.”

The north London outfit were able to get the win without captain Aubameyang, although Arteta would not reveal the specifics behind his absence.

“He had a disciplinary breach, that applies to everybody. That’s a non-negotiable and when that happens he’s out of the team.

“Whatever happens in the dressing room, I cannot share. I am sorry. I’m telling you the reason, I cannot lie, it was that, this is where I stand. From my side, I will never [say what the breach was.]”