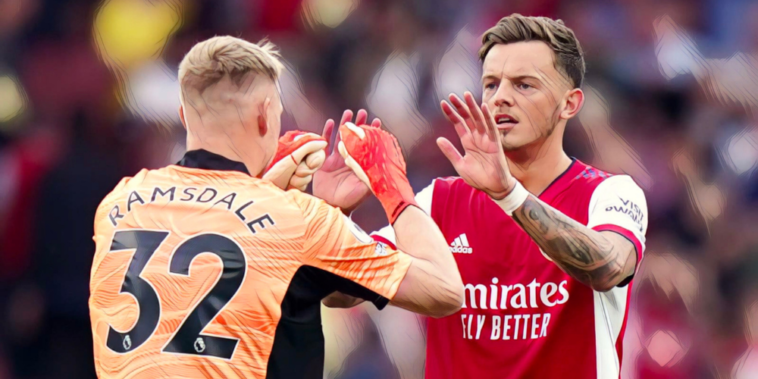 Mikel Arteta has expressed his delight after Arsenal had a quartet of names included in Gareth Southgate’s latest England squad.

Aaron Ramsdale, Ben White, Bukayo Saka and Emile Smith Rowe have all been included for the fixtures with Switzerland and Ivory Coast later this month, with no Premier League side boasting more call-ups than the Gunners.

Speaking at his pre-match press conference ahead of Arsenal’s trip to face Aston Villa this weekend, Arteta said he was ‘very happy’ to see the Gunners quartet earn inclusion and believes its a ‘good sign’ of his side’s progress.

“Very happy, I’m really happy, especially for the boys because they deserve to be there,” he said. “They work so hard and I know how much it means for them to represent their country, and as a club I think we have to be very proud that our players are in the frontline and being noticed. It’s been a long time since that happened so I think it’s a good sign.”

Ramsdale will have a chance to stake his claim as England’s number one goalkeeper during the upcoming international break, having earned praise from Leicester boss Brendan Rodgers for his performance against the Foxes last weekend.

The 23-year-old has enjoyed an excellent debut season at the Emirates and Arteta revealed that Ramsdale has ambitions of being number one for club and country.

“He is there now and he’s going to be fighting for a place and knowing Aaron he’s going to be pushing very hard because it’s one of his dreams, and then it will be down to the coaching staff and the manager to decide if he will be number one.”

Arteta discussed the progress that Ramsdale and White have made since signing for Arsenal last summer, with the duo arriving with scrutinised price-tags from Sheffield United and Brighton respectively.

The Spaniard has praised their development under his coaching and admits he was ‘very, very convinced’ that the summer arrivals would prove to be successes in North London.

“It’s down to the players,” he said. “At the end the players have the quality, they have the mental strength, the ambition and those are things that were important at the beginning because you have those conversations with the players.